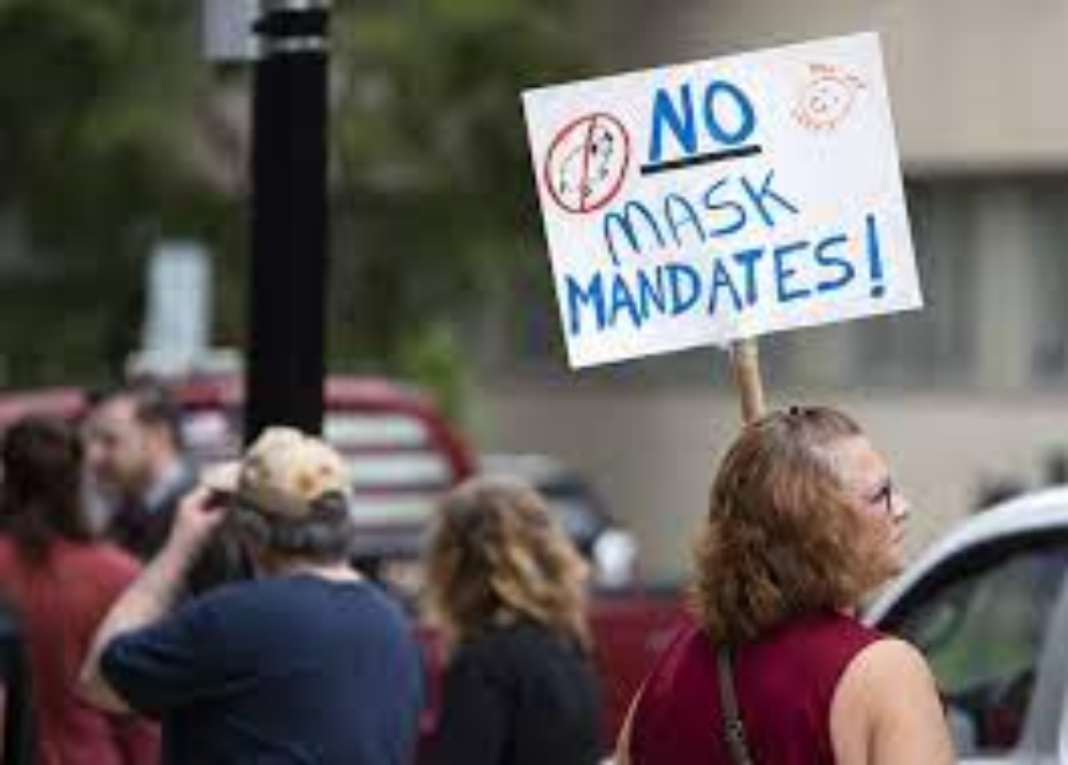 My study of the data convinces me that mask mandates are utterly useless. The one thing in their favor is that, unlike shutdowns, they do not inflict vast human and economic damage. Rather, they are what many call a minor inconvenience, or what I think are mostly a symbol of submission to authority.

In free states around the country, people have been going maskless for a while. But here in blue/purple Minnesota, it took updated CDC guidance to cause our proto-fascist governor to suspend his mask mandate. This weekend was the first time I was able to observe the state of freedom here.

My experience was in the suburbs. (Minneapolis and St. Paul continue to impose mask requirements not recommended by CDC, apparently because they are such a beacon to visitors despite exploding crime rates.) Last night we ate at a nice Japanese restaurant in our neighborhood. On the way in, we saw two young women, obviously close friends, having drinks outdoors, on the patio. One was normal, while the other was double-masked. Why? God only knows. Somehow, young people are especially susceptible to mask mania.

Inside, the restaurant followed what seems to be the usual practice here: they insisted we wear masks for the 10 seconds or so, tops, it took to walk the 15 feet from the entrance to our table. After that, forget about it. Servers were masked, customers were not, although one guy near us had his mask hanging from one ear. Just in case, I guess.

There is no conceivable theory on which it makes sense to wear a mask for a few seconds while you walk to your table, and then discard it, along with everyone else. But that ritual is enacted many thousands of times, every day.

Other than restaurants, businesses have generally thrown in the towel, or rather the mask. Target initially wavered, saying that it was considering requiring masks despite the CDC guidance. Then Costco and Walmart said they were going mask-free for vaccinated people, and Target quickly fell into line.

Over the weekend we shopped at two grocery stores in our area. Both had signs saying that people who have not been vaccinated should wear masks. Of course, no one knows who those people are, so there is no possible enforcement. Happily, most people in those grocery stores were unmasked. Today I went to a Walgreens drug store and brought a mask along, thinking that a pharmacy might be a lagging indicator. No need to worry: the sign said that only non-vaccinated people should consider wearing a mask.

Still, in all of these stores, quite a few people did wear masks. The same thing happened at Total Wine, where the sign said they recommend that people who have not been vaccinated wear masks. Here in Minnesota, more than 60% of the population has been vaccinated, and that percentage is no doubt much higher among adult shoppers at the suburban stores we frequented this weekend. It seems clear that quite a lot of people have been vaccinated, see the signs saying that masks are not required or recommended for them, and wear masks anyway.

Why is this? Are some people ignorant of the science and think that masks will somehow protect them, even though no one has claimed that masks can protect the wearer? Or has mask wearing become a form of virtue signaling that some people, having internalized the message, are reluctant to give up? I think the latter explanation is more likely. If so, we will continue to see limited mask wearing for some months until those who wear masks feel so silly that they give them up.

The last place I visited today was my gym. In Minnesota, gyms have been closed, re-opened, closed and re-opened again. For some months, masks have been required, even though everyone I know of agrees that it is unhealthy to wear a mask while you are exercising. Today was bliss: no sign on the door, no masks in sight. Back to normal life.

One nice thing was that gym employees as well as customers were mask-free. I am concerned that many restaurants and stores continue to require their employees to wear masks, even though there is no scientific basis for this, and it is contrary, as I understand it, to current CDC recommendations. I think all of us should urge owners and managers of businesses to stop making their employees risk their own health for no possible benefit. I look forward to the day when I can see all of the people in stores, restaurants and bars with whom I interact. And I look forward also to being able to understand what they are saying, when it is no longer mumbled through a pointless face covering.

The anti-mask tide is running strongly, but I can’t close without noting this: the Minnesota Zoo, literally in my own backyard, continues to require masks for a reason you probably didn’t foresee:

No matter how irrational masks might appear, if there is a tapir or a tahr that might come down with a cough or sniffle, there is still a case to be made for them! Leftists will never give up, apparently.

We are currently experiencing a preference cascade. Most people want to get back to their normal lives–not some insipid “new normal,” but life as we knew and liked it. We are seeing the effects all around us. But some liberals are holding out, wearing their masks and trying to force the rest of us to do the same. These liberals are like the Japanese soldiers who tried to keep fighting WWII long after it was over. Normality is winning out, and we should extinguish pockets of liberal mask wish fulfillment wherever we find them.