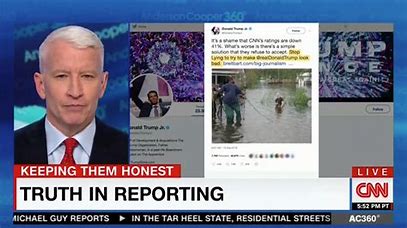 Man, this is not what I expected. Doesn’t the perfectly inoffensive David Muir rock something like nine million viewers a night for ABC’s national newscast? You never hear either side grumbling about his biases either, so you would think he’d win a poll like this by default.

Not so. America, particularly blue America, has a fever and the only prescription is more Anderson Cooper.

Further evidence that we’re in the darkest timeline: A CNN anchor is the most trusted newsman in the U.S.

Republicans do trust Muir more than any other anchor who isn’t overtly conservative. And Democrats trust him nearly as much as any other anchor on the list — with the glaring exception of Cooper, who’s killing it with 75 percent of Dems rating him as trustworthy. No one else is particularly close to that on either side. What gives?

Is it just that Cooper’s been famous for much longer than Muir, never mind that Muir has an audience many times larger than his? Or is it that Cooper is *relatively* nonpartisan in the context of CNN’s line-up, which makes him seem trustworthy? Until recently he was followed by Chris Cuomo and then Don Lemon. Anyone would look like Edward R. Murrow in that crowd.

The results on most and least trusted networks are fascinating too. I can’t tell you how much it makes me laugh that even the Weather Channel can’t do better than 52 percent trustworthiness among all Americans.

Americans are sharply divided along partisan lines on how much they trust the news reported by national media organizations.https://t.co/uWwz5Pnfa7 pic.twitter.com/6pO7pi0VYR

The fact that so many outlets are in the band between 30 percent and 40 percent makes me think much of this is less about considered judgment than partisans on each side giving knee-jerk thumbs up or thumbs down based on assumptions. If you’re asked about the Associated Press, for instance, you give thumbs down if you’re a Republican because the AP is a big media outlet and all big media outlets are rotten with liberal bias. And if you’re a Democrat and you’re asked about it, you give thumbs up because those damned Republicans are always complaining about the media and hate facts.

There are a few interesting wrinkles in the two graphs above:

2. Despite the reputation Fox enjoys for dominating conservative media and driving Republican thought, it’s barely rated any more trustworthy by Republicans than MSNBC is rated trustworthy by Democrats. In fact, Democrats rate the Journal as being roughly as trustworthy as Republicans rate Fox. It’s unclear whether Fox’s rating with Republicans is underwhelming because some centrist Republicans disdain the network for being radical or because hardcore populists disdain it for not being radical enough (maybe both?) but it’s a surprise.

3. The Weather Channel aside, Fox is the only outlet rated as trustworthy by more than half of Republicans. Among Democrats, however, most outlets seemingly enjoy a presumption of trustworthiness: No less than 14 networks or publications named are above 50 percent and another three are close. The only outlets that aren’t are the overtly conservative ones and, weirdly, the Guardian, which has always leaned left. (Maybe not enough Dems have heard of it, as it’s a British paper.) In fact, various “impartial” news outlets here rate much more highly among Dems on trust than the overtly liberal MSNBC does.

4. Trust ratings are lower among Republicans than they are among Democrats even when comparing outlets that each party distrusts. For instance, more Democrats trust the hyper-partisan right-wing outlet Newsmax than Republicans trust Newsweek. More Democrats also trust Sean Hannity and Alex Jones(!!) than Republicans trust Gayle King or Jake Tapper. Again, I think that’s probably a function of each party’s “default” on questions about the media. Ask a Republican about an anchor he doesn’t have a strong opinion about and he’ll likely default to saying he distrusts them. Ask a Democrat the same thing and he might tilt the other way. Either way, congrats, I guess, to Alex Jones on having the smallest partisan gap on trustworthiness of anyone tested.