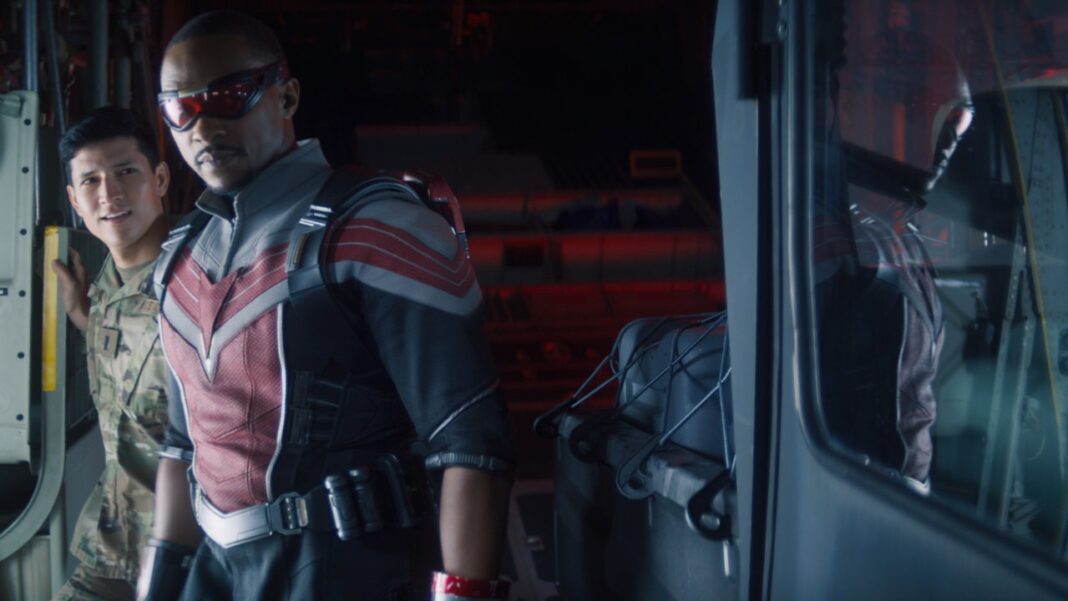 This post contains frank discussion of episode one of The Falcon and the Winter Soldier. If you’ve not watched yet, now is the time to leave.

Thor’s hammer was literally, and mystically, locked to ground for all except the the God of Thunder—but Captain America’s shield is proving to be just as hard to carry. The new Marvel series The Falcon and the Winter Soldier is, at its core, an exploration of who is worthy to take on the mantle of the man who stood for the ideals of this country. In the latest episode of Still Watching, we try to push our way to some understanding of the answer.

Episode Two opens on the new “Star Spangled Man,” John Walker (Wyatt Russell) who is genuinely struggling with the weight of his new assignment. He is bolstered by his old friend and fellow soldier Lamar Hoskins (Clé Bennett), who is known in comics lore as the hero Battlestar. But it’s the introduction later of another soldier (actually supersoldier) that forces the story to reckon with even more challenging questions about both our real and imagined history.

Carl Lumbly, perhaps best known for his work on Alias, turns up looking much older than he really is to play Korean War veteran Isaiah Bradley, whose unsettling story was first told in the comic book storyline Red, White, and Black. (Joanna Robinson correctly guessed which character he would be playing in the previous episode.) As those who’ve watched the latest installment know, Isaiah also has superpowers, although he does not think of them as a gift. More like they were forced on him, and he was cast aside when his usefulness ended.

We delve into where the character’s history intersects with real life while continuing to answer burning questions about the latest foray into the Marvel Cinematic Universe.

Where to Watch The Falcon and the Winter Soldier:

All products featured on Vanity Fair are independently selected by our editors. However, when you buy something through our retail links, we may earn an affiliate commission.

— Woody Allen, Dylan Farrow, and the Long, Uphill Road to a Reckoning
— The Fall of Armie Hammer: A Family Saga of Sex, Money, Drugs, and Betrayal
— Justice League: The Shocking, Heartbreaking True Story of the #SnyderCut
— Jimmy Kimmel Breaks Down in Emotional Interview With Ady Barkan
— Sharon Stone on How Basic Instinct Nearly Broke Her, Before Making Her a Star
— Oscar Nomination Snubs and Surprises: Delroy Lindo, Aaron Sorkin Strike Out
— Raya and the Last Dragon’s Kelly Marie Tran Believes Her Disney Princess Is Gay
— From the Archive: Who Stole the Oscars?

— Not a subscriber? Join Vanity Fair to receive full access to VF.com and the complete online archive now.