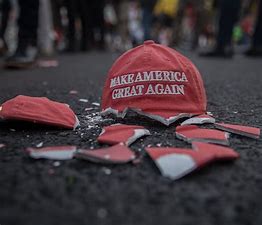 Matthew Continetti opens his new book on the history of American conservatism with a reminiscence of his first day at the D.C. offices of the Weekly Standard “on July 6, 2003, three months into the Second Iraq War.”

Luminaries like David Brooks and Bill Kristol worked there in those days. George W. Bush was among the journal’s readers. The Project for a New American Century and the American Enterprise Institute were housed in the same building. “At the time,” Continetti writes, “1150 Seventeenth Street was more than an office building. It was an intellectual hub—the frontal cortex of the American Right.”

Two months later, in September 2003, I showed up for my very first day of preschool at 18 North Ave. in Rockland, Massachusetts. The building, which had housed the parish grade school until my mother’s sixth-grade year, still bore at the top of its facade a solid stone cross and the seal of the cardinal archbishop of Boston. It was an intellectual hub of roughly the same caliber.

As the fawning introduction makes clear from the get-go, The Right is driven largely by nostalgia. It is, in part, an elegy for two overlapping traditions: that of the Cold War, which saw classical liberals, religious conservatives, ex-leftists, and others aligned against Soviet communism; and that of the Weekly Standard, which unified the fusionism of National Review with the neoconservatism of Commentary, promising a new path forward for an alliance whose common enemy had vanished.

This is an odd time to publish a positive history of either. The strange liberal conservatism that bubbled up in the GOP for just under a century is almost entirely gone now—consigned to the ash heap of history, to borrow a Reaganite phrase. Second-generation neoconservatives like Kristol (Continetti’s father-in-law) have abandoned the pretense of conservatism entirely; eminent paleo-neoconservative Norman Podhoretz, meanwhile, is publicly pro-Trump.Those who stand athwart history yelling, “Okay, fine, but could you be a little nicer about it?” no longer control the conservative movement.

So The Right is a study of the “true conservatism” issued just as it disappears. History written by the loser can be a fun genre, done correctly. But Matt Continetti does not have Jeff Davis’s flair for the dramatic—only his propensity for detail.

Which is to say that this book is, above all else, a boringone. Anyone who already knows a bit about the subject will not learn anything new here; anybody who doesn’t know already is unlikely to care what Charles Lindbergh wrote in his diary on any given day, or how, when, and why a minor thinker like Michael Novak changed his mind about capitalism.

The overload of historical minutiae is exacerbated by overwriting. If Continetti would like to know why the American people think right-liberal elites are out of touch, he might start with the fact that he calls the problem “disintermediation.”

The shortcomings of The Right are not merely structural. There are crucial errors in the substance, too. Prejudice for the respectable, centrist conservatism of the Weekly Standard breeds a skepticism of certain figures who belong at the center of the conservative story.

Joseph McCarthy is waved away as a demagogue. “For a time,” writes Continetti, “it seemed as though [McCarthy’s] strategy of condemning American institutions as irrevocably corrupted was popular and might succeed. It could not, of course.” If Senator McCarthy had believed that American institutions were “irrevocably corrupted,” he would never have launched his heroic crusade to rid them of communist infiltrators. Tailgunner Joe’s assessment of the status quo was, in fact, the proper conservative one: corrupted, but quite revocably. The author adds: “Ultimately fantasies cannot withstand the pressure of reality.”

And then there’s Pat Buchanan. In “Nixon’s Conservatives”—the book’s best chapter by far—Buchanan emerges as a key protagonist. He is effectively credited for most of the president’s political successes. He appears again as a conservative force in the Reagan administration—another of the stronger points in The Right. His famous 1992 RNC speech, one of the most compelling distillations of moderate, populist cultural conservatism ever offered by an American public figure, is treated at some length.

Only once Continetti reaches the foundation of TAC did I realize I was supposed to think Buchanan was the bad guy. Suddenly the genius of the Nixon administration, the prophet of the Culture War, was revealed to be a brutish anti-Semite. In a long essay on the arguments for war with Saddam Hussein, Buchanan neglected to “attack the most famous members of the ‘War Party,’ all of whom were gentiles,” and instead “impugned the Jewish intellectuals who backed the invasion.”

Continetti claims, “He might as well have been quoting the Protocols of the Elders of Zion.”

This smear is as vicious as it is moronic. Of course the war’s prosecutors—Cheney, Rumsfeld, Rice, etc. (“cautious, circumspect, and suspicious of ideology in foreign affairs,” according to Continetti)—are all deserving of the harshest condemnation. But they are, quite simply, not the subject of Buchanan’s essay. “Whose War?” was about the Iraq debacle’s intellectual boosters: people like Paul Wolfowitz, Richard Perle, and Robert Kagan who (oddly enough) appear in The Right as exemplars of neocon thought on foreign policy. There may be a few omissions in the piece, but the plain fact of the matter is that Pat Buchanan’s catalogue of hawkish intellectuals is practically identical to Matthew Continetti’s.

The careful reader, too, will detect a hint of inconsistency: In page after page of positive treatment of Jude Wanniski, the eccentric apostle of supply-side economics, the rather important name “Farrakhan” (a personal friend and hero of Wanniski’s) does not pop up once. Yet elsewhere Continetti is more fair—David Frum, for instance, a neoconservative superstar, comes out looking very badly. William F. Buckley Jr., clearly Continetti’s hero, has his virtues exaggerated but his vices recognized. The folly of the Iraq war is never quite admitted, but it’s certainly hinted at.

Continetti also readily admits to the populist thread running through the whole tradition. A kind of continuity is suggested between the old New Right of Paul Weyrich and co. and the New Right on the rise today. Yet that strain, opposed as it is to the liberal one, is treated with skepticism. Donald Trump is introduced as “a populist like Andrew Jackson, William Jennings Bryan, Huey Long, Father Charles Coughlin, Joseph McCarthy, George Wallace, Ross Perot, Pat Buchanan, and Sarah Palin.” Besides the fact that none of these people is a populist like any of the others, suffice to say that the comparisons (save maybe that to Sarah Palin) are not meant to be compliments.

Trump’s “American Right resembled conservatism before the Cold War.” That is, it was skeptical of war, trade, and immigration without limits. “Trump was a populist demagogue” who married “the policy views of Calvin Coolidge with the rabble-rousing of McCarthy.”

Here Continetti’s vision becomes clear: The tenuous alliance between conservatives and liberals against a common enemy, rather than conservatism itself, is the subject of The Right. This, and potentially more, is suggested by Harvey Mansfield’s approvingly quoted belief “that the principal task of conservatism is to save liberalism from the liberals.”

Nobody who sincerely believed that could claim to be the arbiter of the right’s true history. Necessity forced right-wingers to make a deal with liberals that lasted for generations; that practical alliance did not magically fuse the content of liberalism with that of conservatism. But it did (for reasons predicted by Brent Bozell and others) give liberals the upper hand. It is entirely predictable that now, as that alliance starts to fracture, they should recast history to justify continued dominance of a movement that has afforded them so much.

Continetti’s own career has furnished, among other things, a house in the upscale D.C. suburb of McLean. He tore it down not long ago to build a new one on the land. (Surely there’s a lesson in that.)

Ayman Odeh: “I have a dream, a Palestinian state will be...