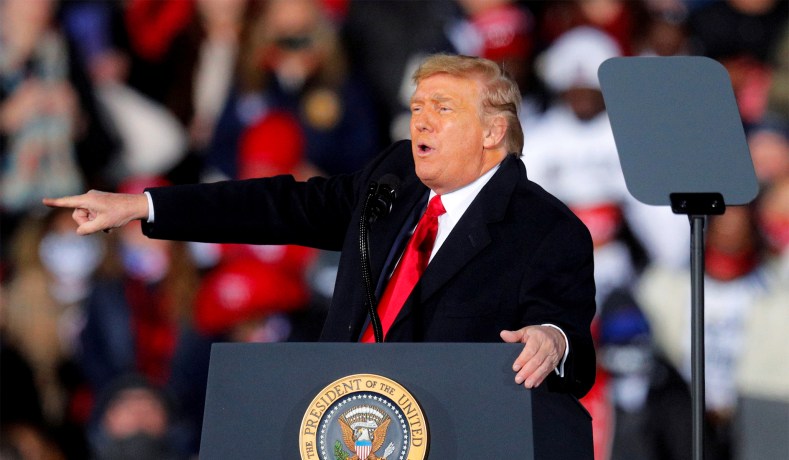 The editors of the Journal had a strong editorial on the former president’s efforts to blame everyone but himself for his election defeat and the loss of the Republicans’ Senate majority. They continued the argument after Trump hit back.

One of the sub-disputes concerns the COVID-relief bill that President Trump signed in December. Trump has said that Senate Republican leader Mitch McConnell’s resistance to his request for larger relief checks for households cost the party’s Senate candidates in Georgia some votes. That McConnell made a political mistake on this issue is plausible, especially when you consider that those larger checks are now going to be issued anyway, by an all-Democratic government.

But I don’t know how large a factor this issue was in the election. Between the presidential election and the special Senate elections, turnout fell most in Trump’s strongest counties. That’s more consistent with the Journal‘s theory — that Trump depressed Republican votes in Georgia by insisting that the state’s elections were riddled with fraud and the state’s leading Republicans were corrupt — than it is with the anti-McConnell story.

Mr. Trump’s Treasury Secretary announced support for the $600 checks on Dec. 8, and the GOP swung behind the proposal. He didn’t endorse the $2,000 checks until Dec. 22, giving Democrats a sword against the two GOP Senate candidates who had endorsed $600. The two eventually endorsed $2,000 but looked unprincipled in doing so. Mr. Trump’s $2,000 flip-flop knee-capped his own party’s candidates.

In its effort to be succinct, the Journal understates how irresolute Trump was on this question. During the second half of 2020, he occasionally talked up the possibility of large checks but didn’t make it clear whether this was something he really wanted or something more like the gleaming infrastructure projects he sometimes mused about. His own aides, not just senators, felt authorized to go ahead on the second understanding.

On July 1, 2020, after House Democrats had included $1,200 checks in their COVID-relief wish-list bill, Trump said he wanted to go bigger. In September, he seemed to endorse the $1,200 checks. He reportedly brought up the idea of $2,000 checks in early December, before Mnuchin endorsed $600 checks. On December 13, after Mnuchin’s endorsement, Trump said on TV that he was “pushing . . . very hard” for larger checks. On December 17, he reportedly told allies he would like checks in the $1,200-2,000 per person range, but refrained from demanding those checks because his aides said it would blow up congressional negotiations.

On December 21, Congress passed a bill with the $600 checks. The next day, as the Journal notes, Trump demanded that the bill be amended and re-passed with larger checks, suggesting he would veto it otherwise. He kept everyone guessing for a few days, and then caved, signing the bill on December 27.

If Trump had said in the fall that he wanted $2,000 checks, credibly promised to veto anything short of that, and made it clear he would call out congressional Republicans who balked, he probably would have gotten them. But it wasn’t clear that he was serious about this desire until after Congress had already passed a bill, and even then he wasn’t entirely serious. The way he actually conducted himself achieved nothing except to elevate an issue that helped Democrats.

It may well be that McConnell should have acceded anyway, endorsing the $2,000 checks in early December and working to get Senate Republicans on board. But criticism of McConnell doesn’t amount to a defense of Trump. If the popularity of $2,000 checks helped cost Republicans the Senate, it makes the former president more responsible for the defeat.

Arizona: New Machines In Use for auditing

Capitol Police to Use military surveillance systems that is used for...