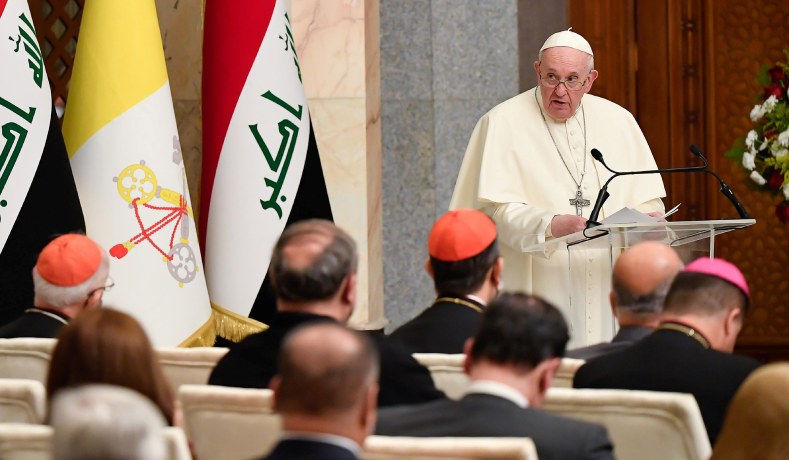 When @Pontifex called his trip to Iraq a “pilgrimage,” I couldn’t stop smiling.

This verbiage means so much. Western Christianity is finally recognizing its Near Eastern Roots.

📹VIDEO | In this place ISIS promised to conquer Rome and behead the Pope. Today #PopeFrancis arrived in Mosul to pray for peace, recalling that God is the God of life and “it is wrong for us to kill our brothers and sisters in his Name.” #PopeFrancisinIraq #PopeinIraq pic.twitter.com/qu6Bqvdhkl

#PopeFrancis said he was “speechless” seeing ISIS destruction in Mosul but touched by witness of Christians who are focused on forgiveness. “We are so great at insulting people & condemning them,” but forgiveness is more powerful. (photo: Paul Haring) pic.twitter.com/n8cU9scnz7

This afternoon, after Mass in Erbil, Pope Francis met with Mr. Abdullah Kurdi, father of little Alan, who was shipwrecked with his brother and mother on the Turkish coast in September 2015 while trying to reach Europe with his family.#PopeInIraq #PopeInKurdistan pic.twitter.com/gQQhW9JH8H

Cardinal Louis Sako, head of the Chaldean Catholic Church, urged the pope to hurry [the victims’] sainthood cause, meaning to publicly acknowledge that the 48 Catholics murdered by five terrorists during Mass were killed in odium fidei, meaning in hatred of their faith.

Two of those murdered were young priests, along with several children and a pregnant woman.

Speaking to a crowd that saw its girls and women sold as property by ISIS, Francis gave a “heartfelt thank-you to all the mothers and women of this country, women of courage who continue to give life, despite the wrongs and hurts.”https://t.co/7wF4942cbk pic.twitter.com/n7S98rif1l

8. Meet the woman behind the visit to Erbil

Caring for Iraqi Christians also means affirming the distinct ethnic identities that many of them claim, whether Assyrian or Armenian or otherwise. To suppress one side of their personality while supporting the other is to erase them all the same. https://t.co/Mt4MHBhaos

#PopeFrancis in guestbook: “From this church, destroyed & rebuilt, symbol of hope for Qaraqosh & all Iraq, I ask God through the intercession of the Virgin Mary for the gift of peace.” https://t.co/7wF4942cbk pic.twitter.com/NWSttYLW63

“The mentality, the culture, has began to change,” Cardinal Louis Raphael Sako told journalists on Sunday, as he was waiting for Pope Francis to arrive in Qaraqosh from Mosul, two cities devastated by the terrorist from Islamic State between 2014 and 2017.

“First, the waiting for the pope, and then his presence, have produced a miracle,” Sako said.

Pope Francis’ visit this week will remind the world of the death-defying courage of Iraq’s religious minorities – their resolute commitment to their faith, the perils they continue to face, and the crucial task of recovery. Nibras Khudaida and others who survived the ISIS-led genocide hope it’s not too late for leaders in Washington to follow his lead.

16. Pope Francis at the Syro-Catholic Cathedral of “Our Lady of Salvation” in Baghdad:

Here I think of the familiar image of a carpet. The different Churches present in Iraq, each with its age-old historical, liturgical and spiritual patrimony, are like so many individual coloured threads that, woven together, make up a single beautiful carpet, one that displays not only our fraternity but points also to its source. For God himself is the artist who imagined this carpet, patiently wove it and carefully mends it, desiring us ever to remain closely knit as his sons and daughters. May we thus take to heart the admonition of Saint Ignatius of Antioch: “Let nothing exist among you that may divide you… but let there be one prayer, one mind, one hope, in love and in joy” (Ad Magnesios, 6-7: PL 5, 667).

Before leaving #Mosul, Pope Francis made a private visit to the destroyed Syriac Orthodox and the Armenian churches.
Pics from @HolySeePress #PopeInIraq pic.twitter.com/ijcOFJAxVj

20. NPR: ‘I Come As A Pilgrim’: Pope Francis Begins Historic Visit To Iraq

Iraq’s Christians probably numbered about 1.5 million in 2003, but as chaos followed the US-led invasion of Iraq, many left the country and there may be as few as 300,000 left. Those gathered for the pope’s visit said he was encouraging them to stay in Iraq, despite adversity, rather than to seek asylum elsewhere.

“It’s a message from the pope to us,” said Thana Nasser, a doctor who had waited outside the church to see him pass. “It’s a message to everybody to stay in our home, not to go outside – because it’s our land, it’s our family, it’s our everything,” she said.

The team preparing for the visit, Rasche said, was also heartened by the stubbornness of Pope Francis “even with all the difficulties of this trip in trying to put it together with our small staff – to see the continuing courage of the Holy Father that just kept saying, ‘I will come’  – you know with rockets attacks and whatever – he has not deterred.”

“The Vatican sought to include Jews not only in the prayer but also physically at the interfaith meetings. It appears that the Iraqi government stymied efforts for any Jews to travel to #Iraq, according to a knowledgeable source.” https://t.co/JRRBC5cOXg

#PopeFrancis: I came to Iraq as a pilgrim in your midst, to thank you & confirm you in your faith & witness. I can see the church in Iraq is alive, Christ is alive & at work in his holy, faithful people. May Our Lady intercede for us, lead us to Christ & God’s power, wisdom. pic.twitter.com/yMqnIpTZpj

24. Statement from the White House:

To see Pope Francis visit ancient religious sites, including the biblical birthplace of Abraham, spend time with Grand Ayatollah Ali al-Sistani in Najaf, and offer prayers in Mosul — a city that only a few years ago endured the depravity and intolerance of a group like ISIS — is a symbol of hope for the entire world.

I congratulate the Government and people of Iraq for the care and planning that went into organizing this monumental visit, and continue to admire Pope Francis for his commitment to promoting religious tolerance, the common bonds of our humanity, and interfaith understanding.

Now please watch that your Iran policy doesn’t hurt them.

And what a shame he didn’t call mention his fellow persecuted Christians the pope went to Iraq to see and show to the world.

25. Andrea Picciotti-Bayer: Pope Francis in Iraq Triggers Biden Statement But Is It Enough?

A joyous day of remembrance, forgiving, fraternity & friendship ending in Holy Mass. Our deep gratitude/prayers to His Holiness for courageously coming to your people & sowing many seeds with our Iraqi brothers & sisters of coexistence, hope, peace, prosperity & reconciliation. pic.twitter.com/f0YIaZfEtK

What a delight to see عين الموصل reporting something so positive. #PopeFrancisInIraq https://t.co/1QE0es8N7B