Home Politics “This is Not a War. This is a Genocide”, Biden will have... 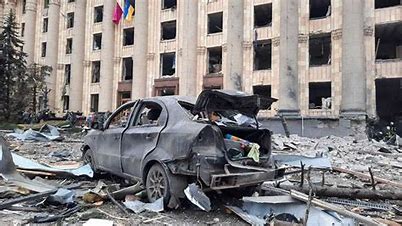 Rep. Victoria Spartz is the first Ukrainian-born member of the U.S. Congress and the first member born in a then-Soviet Republic. Today during a press briefing held by House Republican leaders on the State of the Union address, Spartz spoke of the war in Ukraine. She said, “This is not a war. This is a genocide of the Ukrainian people by a crazy man.”

Republican Representative Victoria Spartz was tapped to speak about the Russian invasion of her homeland. She calls on President Biden to act decisively. She wants him to arm Ukrainians, and halt purchases of Russian oil, warning that “he will have the blood of Ukrainians on his hands” if he does not. Her voice quivered a little as she addressed the press and after she spoke, both McCarthy and Scalise gave her a hug.

A former member of the Indiana Senate, she served as CFO in the office of the Indiana Attorney General before that. She was also an adjunct faculty member at the Kelley School of Business in Indianapolis, and she has owned real estate and farming businesses. Victoria is a co-founder of the Hamilton County (Indiana) Tea Party. She met her Hoosier-born and raised husband on a train in Europe. They married in 2000. She immigrated to the U.S. then, at the age of 22, and she became a U.S. citizen in 2006.

She began by saying she didn’t have prepared remarks, that she would speak “from the heart.” Putin can’t get over the fact that Ukrainians don’t want socialism, the Soviet Union, or communism, she said. Ukrainians want to be free people, “they want to be with the West.” She told a personal story of her 95 year old grandmother who lives in a city being bombed non-stop. The Russians are unable to take control of the city so they are “bombing civilians non-stop.” She said that a young woman in the neighboring village told her grandmother that women and children are being used as human shields by Russian troops.

“I want to reassure you that the United States will always remain committed to our allies and promoting peace, stability, and freedoms around the world,” said Rep. Spartz. ” I would also like to encourage the Ukrainian people to stay united and be ready. Freedom is never free and never easy, but it is worth it.”

She delivered the same message to those gathered in support of Ukraine in downtown Indianapolis on Saturday afternoon at a rally on Monument Circle. “Freedoms are never free,” Spartz told the crowd. “I can tell you all my fellow Hoosiers are standing with you, with Ukraine and with freedom.”

Yesterday Spartz posted a tweet of her hometown, Chernihiv. She said that the Grand Duke from Chernihiv founded Moscow in the 12th century.

Ancient Kyivan Rus city I grew up in – #Chernihiv. Actually, Chernihiv Grand Duke Yury Dolgoruky founded Moscow in the 12th century. They are trying to level everything to the ground, but Ukrainians will not submit!

Ancient Kyivan Rus city I grew up in – #Chernihiv. Actually, Chernihiv Grand Duke Yury Dolgoruky founded Moscow in the 12th century. They are trying to level everything to the ground, but Ukrainians will not submit!
Nexta has real life footage from across UA (caution – graphic). https://t.co/I1hswAtASd

She has been making the rounds on cable television channels, calling for more support for Ukrainians as they fight for their freedom.

Last night, I joined @FoxNews @SteveHiltonx – Ukrainians are in the ‘David vs. Goliath’ fight, good vs. evil, but they will prevail. Please pray for them, since they are fighting for all of us. #StandWithUkraine pic.twitter.com/cbasl6vVLi

The situation in Ukraine has escalated significantly. Last night, I joined @CNNnewsroom with @PamelaBrownCNN to discuss the resolve and determination of the Ukrainian people to be free people. Awful reminder to all of us what it takes to get your freedoms back after you lose them pic.twitter.com/oTOcsbkGqp

Will Biden announce additional measures he will take to help Ukrainians tonight during his State of the Union address? He’s essentially been leading from behind since Putin invaded Ukraine, letting European countries take the lead. Biden was slow on issuing sanctions and still has not moved to increase American production of oil and gas to counter America’s purchase of Russian oil. Energy independence is a national security issue. This war is yet another reminder of that fact. Biden’s pursuit of the Green New Deal is not only impractical, as ‘green’ energy production is nowhere near ready to replace production of fossil fuels in America, but it weakens us as a country. Energy dependence on nefarious actors like Putin must stop.