Roce Today – Politics, Opinions, Gun Rights,Pro-Life and Border Wall
Home Politics Those suspicious IRS audits of Comey and McCabe may not be so... 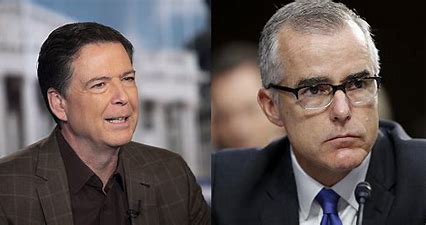 They sure did look suspicious, though, no? Per one estimate, the odds of two top ex-FBI officials who had crossed Trump being randomly subjected to a “compliance research examination” by the IRS were … 950 million to one. Only a few thousand Americans each year out of 150 million taxpayers land in that program, triggering an intensive audit that can last for more than a year. But wouldn’t you know it, the two most well-known “deep state” antagonists of you-know-who somehow ended up on the list.

It’s not as if Trump is above using state power to punish his political enemies either. If any president might be inclined to ring up the IRS commissioner a la his phone call with Zelensky and ask him to “do me a favor” with Comey and McCabe, it’s him.

Still, some details of the NYT story John wrote about a few days ago didn’t sit right. Comey was audited in 2019, McCabe in 2021. If they were being targeted by the IRS for political retribution, would the audits have been staggered that way? And although Trump’s appointed IRS commissioner was still on duty last year, when the McCabe audit happened, would he really have continued to carry out that vendetta now that his patron had left office?

It’s not like this retaliation play would have been risk-free for the participants. If Charles Rettig, the commissioner, turned out to be quietly ordering audits of a president’s political enemies, it’d be the biggest IRS scandal in decades. Rettig would be professionally ruined, maybe even at risk of criminal charges. It’s not like he’s some underqualified MAGA rando willing to do whatever Trump asked of him either. He was once president of the American College of Tax Counsel and the chair of the taxation division of the California state bar.

And yet, the minuscule odds that Comey and McCabe were audited randomly are what they are. It can’t be a coincidence.

Yesterday the Times ran an insightful piece emphasizing that whether the two of them being audited is an amazing coincidence depends on whether the IRS’s intensive audits are truly random across the population. If Comey and McCabe were each selected by chance across the entire base of American taxpayers, then yeah, the odds of that happening are beyond Powerball. It’s all but impossible; they had to have been targeted. But what if the IRS’s selection process for the intensive audits isn’t completely by chance, instead weighted by certain variables that would dramatically increase the odds that both Comey and McCabe would get tabbed?

For instance, what if the IRS insisted on auditing at least one person who works at the Justice Department each year, for whatever reason? It would still be quite a coincidence if the two DOJ employees chosen in 2019 and 2021 were Comey and McCabe, respectively, but far less of a coincidence than if they were chosen among the total U.S. population. How the pool of prospective audit targets is defined is therefore crucially important in figuring out how unlikely it is that their two names came up. But unfortunately, the IRS keeps that information “closely guarded” — for good reason. The point of “compliance research examinations,” after all, is for the agency to learn what sort of tricks taxpayers might be using to misreport their income. If the public knew which specific red flags the IRS looks for when selecting someone for an audit, tax cheats would take more care to hide their own flags.

The point is this: Compliance research examinations aren’t totally random. Comey and McCabe probably landed in the pool of potential targets not because they’re enemies of the right or because they worked for the FBI but because they each developed unusual income streams in the aftermath of their public battles with Trump. In that sense, he did trigger their audits — not by ordering them as acts of political retaliation but by cutting short their careers at the Bureau, forcing them to pursue dramatically different lines of work. Experts told WaPo that when someone transitions from many years of collecting a stable paycheck to suddenly earning big bucks doing something else, go figure that that would catch the attention of the IRS’s audit algorithm.

Comey and McCabe were government employees for years, drawing predictable salaries that were reported to the IRS along with their tax withholding, and they would not have fallen into those categories [of high-income self-employed individuals] during that time.

But then Trump fired them — Comey in 2017, and McCabe in 2018. Comey wrote two lucrative books and started giving paid speeches, and McCabe joined CNN as an on-air law enforcement analyst. Those arrangements, say tax policy experts and former high-ranking IRS officials, would have made both men far more likely to be chosen for a research inspection than they were as FBI employees, because the pool of high earners with such eclectic income streams is significantly smaller…

By firing the two men, though, Trump set the pair up to make much more money than they did at the FBI — launching them into a new tax bracket that the IRS examines much more frequently than it does even well-paid government employees.

The odds of both men being pulled into the research program’s audits by coincidence shortly after Trump fired them may seem slim, but former top tax policy officials told The Post they were certain that’s what happened — though they acknowledged that it looked suspicious.

The original Times piece about the probability of the audits mentioned that “[t]he type of audit that the Comeys and McCabes faced was devised to select taxpayers through a statistical software program that groups them by certain undisclosed factors. The system ‘does not entail employees manually selecting individuals for examination,’ the agency said.” If that’s true then the similar career and wealth arcs that the two men’s lives ended up taking are responsible for their ordeals, not any chicanery by Trump. He is to blame for getting them audited — but only inadvertently, by making them Resistance martyrs, which ended up making them rich.

If you can spare the time, I recommend reading all of the WaPo piece for background on how obnoxious comprehensive research examinations are. They can cost a taxpayer thousands of dollars in attorney’s and accountant’s fees and many months of inconvenience even though he or she isn’t suspected of wrongdoing (or at least intentional wrongdoing). They’re targeted essentially because their unique financial circumstances make them interesting case studies from which the IRS can develop techniques to catch true tax cheats. One taxpayer advocate believes they should be compensated by the government for their trouble since they’ve been targeted without any real probable cause to believe they’ve committed a crime. Why not?

How Much More Should We Pay for Costco’s Chickens?