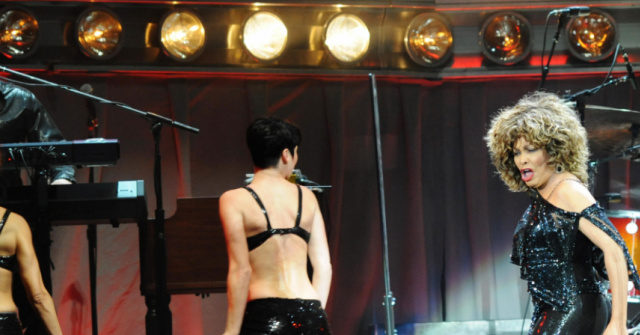 If you want to know the difference between a star and a superstar, a celebrity and a legend, a headliner and someone you will never forget, HBO’s documentary, Tina, a two hour look at the life and career of superstar Tina Turner, answers that question in the only way it can be answered…

You can’t take your eyes off her.

No matter who she’s with on stage, your eyes are only on Tina Turner. There can be five other beautiful women right there next to her, all dressed alike and dancing to the exact same choreography, and you can only look at Tina Turner.

There’s one clip where Turner’s at Cannes with a young and gorgeous Angela Bassett (who earned an Oscar nomination playing Turner in the 1993 bio-pic What’s Love Got to Do With It), and even at age 54, Tina dwarfs Bassett, blows her off the screen, makes her look positively mortal.

No one else could do that.

She was born Anna Mae Bullock in 1939 in Brownsville, Tennessee, and grew up dirt poor during a time when that meant “dirt poor.” She ended up being raised by relatives after her parents abandoned her and her siblings. At age 17, she met Ike Turner, joined his band, married him, worked her ass off on the road for more than a decade, recorded a few hits, raised four boys, and suffered physical and sexual abuse at Ike’s hands until 1976 when, at the age of 37, she literally fled after a terrible beating.

At the divorce, she gave Ike everything: the house, cars, bank accounts, and royalties. She wanted only her name. What followed were eight long, hard, hand-to-mouth years playing hotels and Las Vegas casinos before “What’s Love Got to Do With It” blasted to number one in 1984.

At age 45, Tina Turner was an “overnight sensation.”

Unless you lived through the next three decades, you can’t begin to imagine just how big Tina Turner was. Honestly, it was as if the whole world had been waiting for her, and once she finally arrived, this middle-aged black woman would sell out arenas until she decided it was time to retire in 2009 — at age 70.

I came of age during Tina’s lost years, her time between Ike and the Private Dancer album, so I was 17 before I first laid eyes on her, and that was when the “What’s Love Got to Do With It” video first hit MTV — a moment I will never forget. No one had ever seen anything like this on MTV. Obviously, Turner was gorgeous, but when it came to female artists, we were used to youth, and all of a sudden here was this mature woman with legs up to here and a voice that could do anything… Who is this? I thought to myself. I was an instant fan. An instant convert.

In those days, she was all over MTV, and in those days, MTV was awesome, all about rock n’ roll and good times, so there were Tina interviews and concert clips, and whenever you saw her, she was always on, always laughing, clever, sharp, smiling, confident, sexy, and sporting a talent that blew you right out of your chair.

Keep in mind this was before the Internet, so it wasn’t until I, Tina (the excellent autobiography she wrote with MTV’s Kurt Loder), that I learned her full story, which, of course, only boosted mine and the country’s admiration of her.

Three times I saw Turner live in concert. Once in 1996 during her Wildest Dreams Tour, and twice in 1999 for the Twenty Four Seven Tour. Experiencing Tina Turner perform live is … well, you had to be there. Nothing can recreate the magic of Tina Turner in person. HBO’s Tina does, however, bring to life what we’re all missing now that she’s 81 and retired to Switzerland.

The documentary’s archival clips are just stupendous, many of which I’ve never seen before, and Turner narrates her own story. On top of new interview footage from 2019, there are audio recordings from older interviews, primarily with Loder from the mid-80s, and a 1981 People interview, which marked the first time she revealed Ike’s abuse.

There are also comments from Oprah Winfrey and Bassett that aren’t necessary but add celebrity. The best insights come from Loder and those who worked with Turner over the decades going all the way back to her Ike and Tina Revue days.

At times, and at all the right times, Tina just stops cold to allow Turner’s otherworld talent to speak for itself with extended clips of her live performances, including from her greatest triumph, a 1988 stop in Rio, where 180,000 paying fans showed up just to see her; a world record.

Overall, though, Tina is a bittersweet experience, like flipping through your own photo album, or running your own home movies, where the world still looks as young and full of promise as everyone in it. Millennials might feel different, but Tina kinda left me with a broken heart. This is her goodbye to us. She comes right out and says so.

Besides that broken heart, what you’re left with is a portrait of one of history’s most remarkable women, someone who, even after she became famous, felt trapped by her past, but not because she chose to dwell on it. No, it was everyone else who wanted her to talk about Ike’s abuse, who wanted to cast her as a victim. But while everyone else demanded she hold grudges and lick wounds, Tina herself only looked forward at what was next, at what was possible. That had as much to do with her success as anything, and if there’s a lesson modern America can learn from that extraordinary life, that’s the important one: stop obsessing over what already’s happened and focus on what can happen.

And I never lost one minute of sleepin’,
Worryin’ ’bout the way things might have been.

The good news is that the ultimate result of all her hard work and talent, of all the risks she took, was that all of Tina Turner’s dreams came true, every single one of them… And how lucky those of us are who were there to see it, and who, in our own small way, helped make it happen.