Home Politics Todd Young: He’s against the infrastructure bill he voted for 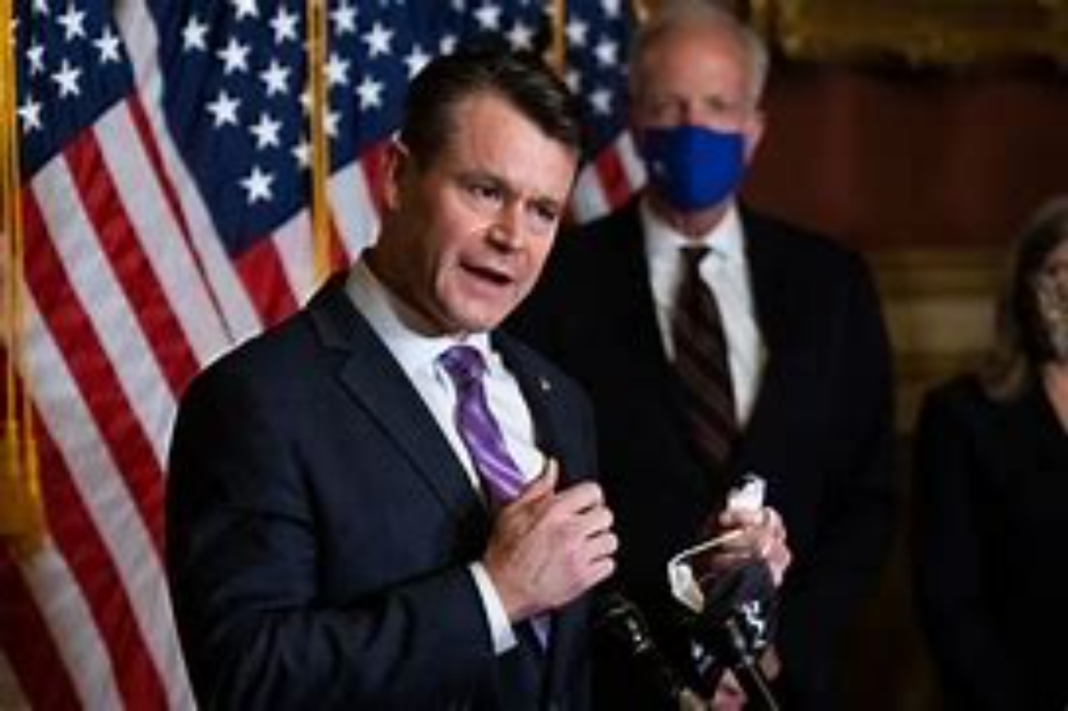 Republican Senator Todd Young is serving in his first term. He isn’t the flashiest of politicians and isn’t usually the subject of news stories. He’s been upping his public profile lately, though, and with re-election looming in the mid-terms, he finds himself in the spotlight. Young is one of the twenty senators in the bipartisan group brought together to work on Biden’s infrastructure bill for passage in the Senate. When the deal was struck and brought to a vote for cloture, Young voted in favor of the $1T legislation only to turn right around and decide he is now against it.

What changed? Well, that is a bit nuanced. He should have been against it in the first place, as another freshman GOP senator who stopped the first cloture vote last week is, but he stayed with the other Republicans in the group. The go-along-to-get-along Republicans knew that the $1T bill is loaded up with lots of funding for things that have nothing to do with traditional infrastructure legislation but they didn’t care. Led by Senator John Thune, who used to be a budget hawk, even after the CBO determined that the costs in the bill are not offset by other provisions, the Republicans in the bipartisan group forged ahead. Using the excuse that the people back home want the pork, Thune reasons the passage of the bill with Republican votes will be an asset in the mid-term elections.

As I mentioned, Young is up for re-election. He took a look at the CBO’s analysis and put the brakes on his support. What? Republicans got played again? Shocker. The bill will add $256 billion to the federal deficit over the next decade. So, Young voted no during a roll call vote Sunday. He says he will be a no on the final vote, set to take place later today as I write this Monday morning. Senator Mitch McConnell and seventeen other Republicans voted in favor of moving the bill to a final vote. On Sunday night, the Senate voted 68 to 29 to end debate on the final infrastructure product.

Suddenly handing Biden and the Democrats a win on the infrastructure monstrosity doesn’t look so appealing for Young. He usually tries to position himself as a moderate but consistently votes as a conservative. No doubt, that is why he agreed to be one of the 10 Republicans on the bipartisan committee, likely thinking it would look good for his re-election campaign. However, that decision has turned to bite him on the rear end. You know who has aggressively come out against the Republicans supporting Biden’s bill, right? Donald Trump.. Guess who hasn’t received the endorsement of Trump in his bid for re-election? Todd Young. Young has the endorsements of two former Hoosier vice presidents, 96 percent of Republican Indiana General Assembly members, and 92 percent of Republican county chairs but not Trump. There is no way Young can vote for it and expect to get Trump’s endorsement.

My statement on the infrastructure bill: pic.twitter.com/LAyk2wnUUU

Young received blowback from the Indiana delegation as he oversaw the passage of the $250 billion U.S. Innovation and Competition Act, Rep. Jim Banks a particularly loud critic. Observers of Young say his actions with the infrastructure bill allowed him to get the bill as far as he could, then the CBO report gave him an out. Now he says he isn’t comfortable with the spending.

The question is how many times will Indiana voters allow Young to start out on an issue one way and change midstream? This is the third time in recent times. He also did it on the issue of Trump’s culpability in the January 6 riot, and on a ceasefire in the Middle East. His re-election bid will tell the tale. Naturally, Indiana Democrats are jumping on Young’s change of mind. They want Biden’s trillion-dollar slush fund to be passed. Lauren Ganapini, executive director for the Indiana Democratic Party said, “This is classic Todd Young, He consistently promises Hoosiers one thing, but changes course when it matters most.” And, Hammond Mayor Tom McDermott attacked Young’s vote in a lengthy statement.

Indiana Sen. Todd Young recently acknowledged that Indiana has 5,500 miles of highways that are in poor condition, which was the reason he initially supported President Biden and Secretary Buttigieg’s bipartisan infrastructure package. This bill would help solve this Hoosier dilemma by delivering close to $1 trillion in aid to states, which could use this money to rebuild their crumbling infrastructure and create good-paying union jobs in the process. Indiana, in particular, stood ready to receive close to $7 Billion of this aid for its own failing roads and bridges.

Today, Sen. Young, who voted multiple times to move this bipartisan bill through the Senate, announced an about-face. He is suddenly claiming that the bill is too expensive for him to support. But this excuse rings hollow when you consider that Sen. Young voted for every pork-filled bill that came his way during President Trump’s administration, resulting in a whopping 8 Trillion Dollar increase to our national debt.

American needs to rebuild its crumbling infrastructure. This bipartisan bill will give us the resources to repair the roadways, airports, and bridges that have been neglected for far too long. And in the process, we can finally rebuild America’s disappearing middle class.

America needs to witness the US Senate actually working together, as Americans, for the betterment of America, instead of just throwing up partisan roadblocks. It appeared for a while that Sen. Young would be one of the leaders in the Senate, helping move a bill that’s important for America forward in a bipartisan manner. Now, with Young’s abrupt about-face, it appears he’s more interested in avoiding a primary challenge than reinvesting in America’s future. Hoosiers expected more from Sen. Young. Instead, we got a man so desperate for an endorsement from the former President, he is willing to sell out the working class Hoosiers.

Mid-term voters are different than presidential election voters. Generally speaking, regular voters are fired up about one issue or the other during mid-terms. Remember in 2010 when the Tea Party came into play and the Obama agenda was “shellacked” as he admitted? Voters were protesting Obamacare being rammed down our throats. That’s how Republican voters are going to feel about this bill and the next one – the $3.5 trillion Budget Resolution that Bernie Sanders promises to introduce today as a follow-up.

The $3.5 trillion Budget Resolution that I am introducing today will allow the Senate to move forward on a reconciliation bill that will be the most consequential piece of legislation for working people, the elderly, the children, the sick and the poor since FDR and the New Deal. https://t.co/Cm7fDGgrlg

Lucy and the football, Charlie Brown. It was amazing that the 10 Republican senators remained in talks with the 10 Democrats after Nancy Pelosi said the quiet part out loud, that the budget resolution would have to be passed along with the first bill. She made the House’s intentions perfectly clear. There was not going to be negotiations in good faith. Yet, the Republicans persisted. Todd Young has been smacked by reality and out of self-preservation is now opposing the bill. It’s too little, too late, as it will pass in the Senate today. Republicans never learn. Prepare for Biden crowing about bipartisanship being back, thanks to him.