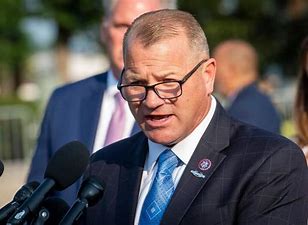 A new policy was quietly put into place after the January 6 riot on Capitol Hill that is now under scrutiny. On January 24, 2022, Politico published an article describing confirmation by Chief J. Thomas Manger that the Inspector General of the U.S. Capitol Police (USCP) has opened an investigation into a new policy of surveillance of elected members of Congress, their staff, and visitors to their offices. Today Rep. Troy Nehls (R-TX) posted a thread on his Twitter account explaining an incident that happened to his congressional office.

There have been congressional inquiries about the tactics used by Capitol Police in the aftermath of the January 6 riot. Lawmakers say that USCP is overstepping now. Chief Manger confirmed that USCP is compiling intelligence dossiers on members of Congress, their staff, and visitors. Rep. Nehls goes into some detail in his Twitter posts. Nehls gives the tweets the red alarm “breaking” status and made it a pinned tweet.

On November 20th, 2021, Capitol Police entered my office without my knowledge and photographed confidential legislative products protected by the Speech and Debate clause enshrined in the Constitution, Article 1 Section 6.

Upon discovering a member of my staff, special agents dressed like construction workers began to question him as to the contents of a photograph taken illegally two days earlier.

They had no authority to photograph my office, let alone investigate myself or members of my staff.

So, why is the Capitol Police Leadership maliciously investigating me in an attempt to destroy me and my character?

Maybe it is because I have been a vocal critic of @SpeakerPelosi, the @January6thCmte, and @CapitolPolice leadership about their handling of January 6th, the death of Ashli Babbitt and the subsequent SHAM investigation.

Nehls doesn’t say why he claims that Capitol Police are trying to destroy him and his character. Perhaps he does so after speaking with the staffer who was questioned by the secret agents dressed as construction workers. Is this the new standard operating procedure now on Capitol Hill – intelligence gathering agents playing dress up and questionably collecting information? This story doesn’t sound as though it is something that was being done above board.

If the name Troy Nehls sounds familiar as it relates to the activities on January 6 it is because he is one of the Congressmen that remained on the House floor and handled rioters who were trying to enter the room.

Nehls is the man in the blue shirt.

I was proud to stand shoulder to shoulder with Capitol police barricading entrance to our sacred House chamber, while trying to calm the situation talking to protestors.

What I’m witnessing is a disgrace. We’re better than this. Violence is NEVER the answer.

He’s a former sheriff in the Houston area and stayed behind when the others evacuated the room. He said he wanted to help his brothers in blue that day. While he criticized the riot that day, he has since criticized the partisanship of the January 6 commission and is a regular critic of Nancy Pelosi. Did Pelosi send her secret police after him? We don’t know yet. Hopefully the Inspector General will get to the bottom of this story.

According to the Politico article, USCP analysts had been directed by Julie Farnam, the acting director of USCP’s Intelligence and Interagency Coordination Division, to “run ‘background checks on people whom lawmakers planned to meet, including donors and associates.”

“When staff were listed as attending these meetings, Capitol Police intelligence analysts also got asked to check the social media accounts of the staffers,” the Politico article alleged.

In his letter to lawmakers, Manger denied the allegations detailed in the Politico article and claimed USCP’s activities were both appropriate and legal.

In a formal police report filed several days after the search in Nehl’s office, an officer said he was doing a routine security patrol on Saturday, November 21, and one of Nehls’ office doors was open. He entered and saw a whiteboard the office uses to brainstorm legislative proposals. The officer took a photo of the whiteboard and gave it to USCP analysts. Then, on Monday, three plain-clothed intelligence officers (those dressed like construction workers) went to the office again and found the lone staffer working during Thanksgiving week. They went on to question the staffer about the whiteboard and the writing on it. This all stinks to high heaven.

The article in The Federalist today points to a possible connection that was written about in the Washington Post around the same time as the secret police were roaming around the office of Rep. Nehl. It was “a story about a federal government contractor in rural Texas who defrauded the United States by supplying Chinese-made body armor instead of body armor manufactured in the United States.”

“From his home in rural Texas, a would-be defense contractor spun a web of fake companies and testing reports to pass off Chinese-made body armor as American equipment that met rigorous standards for use by the State Department and U.S. law enforcement partners in Latin America,” the Washington Post wrote on November 16, 2021. “Tanner Jackson, 32, pleaded guilty Tuesday in Alexandria federal court to one count of wire fraud, a felony punishable by up to 20 years in prison.”

According to Nehls, who previously served as sheriff of Fort Bend County, Texas, his office whiteboard specifically called out faulty Chinese body armor. In fact, that Washington Post article was a key catalyst spurring Nehls to consider drafting legislation banning the procurement of Chinese body armor, a spokesman for Nehls told The Federalist.

What the police report did not include was any reference to multiple items on Nehls’ whiteboard immediately following the words “body armor” referencing Export Administration Regulations dealing specifically with Chinese imports or U.S. Department of Justice standards for certifying body armor.

If the purpose of the intrusion into Nehls’ office was to find some evidence that could paint him as a January 6 rioter or in cahoots with them, San Fran Gran and her secret police are barking up the wrong tree. The photo above from Nehls’ Twitter account on that day shows he was working with the Capitol Police, not against them. I can understand a Capitol Police officer entering an open door during a security parole when he knows that Congress members are gone during a holiday recess but why did he whip out a camera and take photos of the whiteboard if he wasn’t under instructions to do so? Is it now standard procedure for USCP officers to photograph any legislative information they stumble upon in congressional offices, just in case it becomes relevant later? Is Nancy Pelosi using USCP as her intelligence gathering agents against those on the other side of the aisle who criticize her and her political party?

We’ll see where this story goes and if other members of Congress have had their offices secretly searched and photographed.