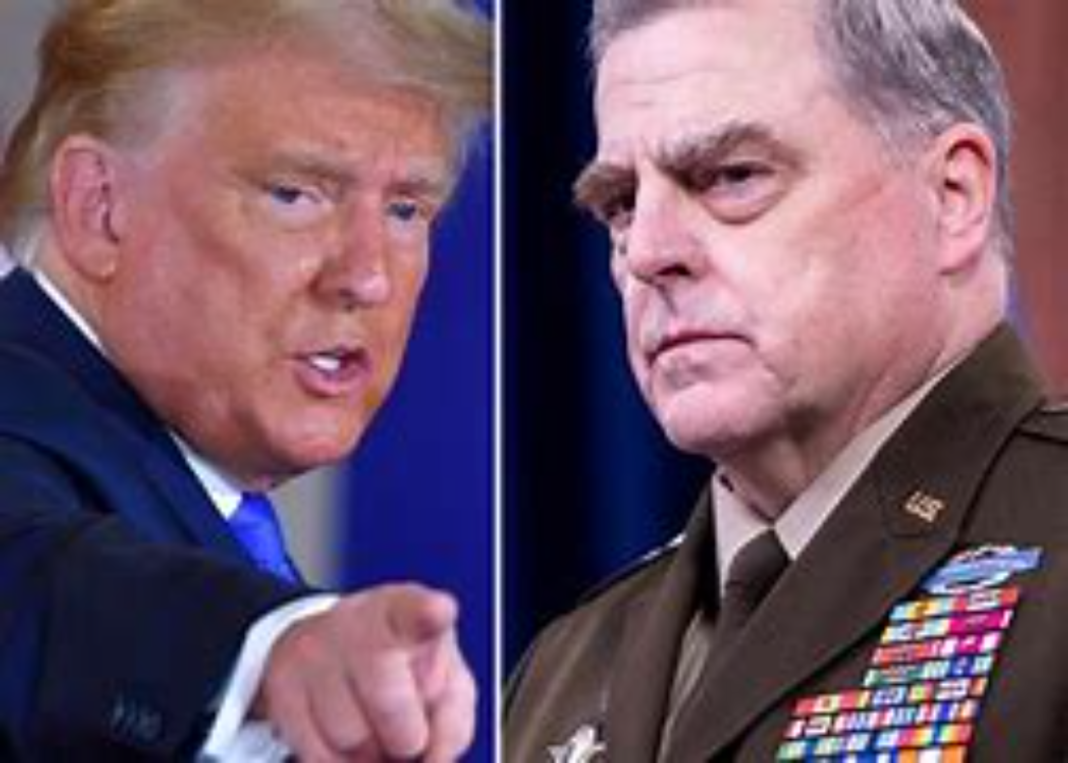 This is a surprise considering Trump is reportedly calling around to allies demanding that they accuse Milley of “treason” over what WaPo reported yesterday. Cotton plans to run for president someday, possibly as soon as 2024 if Trump himself doesn’t run, and will compete for the president’s endorsement. This makes it harder for him to get it.

Cotton is a veteran, though. Maybe he’s unwilling to hang a high officer out to dry over a sensational allegation made by Bob Woodward(!) until that officer has had a chance to address the charge, no matter what Trump might prefer.

Did Milley tell his counterpart in the Chinese army that he’d warn him if the United States was preparing to attack? Even if he didn’t, was he conducting rogue diplomacy in secret with the Chinese by cutting out the civilian leadership? Those were the most blockbuster claims in the WaPo story. Interestingly, two respected reporters seeking to follow up on it have received conflicting information from their sources. Yesterday Fox News’s Jennifer Griffin tweeted this:

I am told that Gen Milley had 2 routine calls with his Chinese counterpart and more than a dozen calls with NATO allies after Jan 6 to reassure them the US government was stable and to reassure China that the US did not plan a surprise attack, an effort to avoid misunderstanding.

The calls with China’s general were “routine”? That’s not what sources are telling WaPo’s Josh Rogin:

“…The risk is [Milley] could have caused the Chinese to miscalculate and take some sort of diplomatic, economic or military action with far ranging consequences, because he was giving the wrong signal, having no understanding of the context in which he was making the call.” 3/3

So Milley was freelancing, leaving the civilian leadership in the dark about his communications with China and running the risk that mixed messages from the U.S. would lead China to panic and lash out.

I am told this is not true. There were 15 people on the video teleconference calls, including a representative of the State Dept and the read out and notes from Milley’s two calls with his Chinese counterpart were shared with the IC and the Interagency. https://t.co/sGRvaKgLfS

Wait, so there were civilian officials involved in Milley’s phone calls with China? And the contents of those conversation were circulated to civilian staff? Sounds like the civilian leadership wasn’t cut out after all.

They were cut out, responded Rogin:

I’m told this (what Jennifer tweeted) is not true. Milley did not properly coordinate: SAO: “When Milley did these calls, it was with Joint Staff, and nobody from OSD participated in it. If someone from State Department was on the call, the Joint Staff should say who it is.” https://t.co/Uub67POGEn

“OSD” is “Office of the Secretary of Defense.” In other words, Milley’s civilian superiors weren’t privy to his calls with China.

Are Griffin’s sources right or are Rogin’s? Complicating this further is the fact that Milley made two calls to China’s general, one on October 30 before the election and the other on January 8, two days after the insurrection. According to Axios, the October 30 call came at the behest of Mark Esper, the secretary of defense at the time. In other words, Milley was carrying out his civilian superior’s wishes:

Esper directed his policy office to issue a backchannel message to the Chinese to reassure them the U.S. had no intention of seeking a military confrontation. The message: Don’t over-read what you’re seeing in Washington; we have no intention to attack; and let’s keep lines of communication open.

These backchannel communications were handled a couple of levels below Esper, one of the sources said. U.S. officials involved thought the Chinese received the initial message well. Milley followed up later in the month with a call to his Chinese counterpart to reiterate the message, two of the sources confirmed.

It’s unclear whether anyone at the Pentagon told President Trump or the White House what they were doing.

The Chinese were spooked and Esper wanted to reassure them there was nothing to fear lest they end up doing something nutty like preemptively attack an American carrier or invade Taiwan. It sounds like Milley’s first call to China’s general was part of that effort. In fact, Rogin’s sources confirmed that Esper was looped in on what Milley was doing:

Senior Defense Official confirms to me @axios reporting on Esper’s role in China calls.
“Milley was absolutely not going rogue. Esper took the initiative on this in October, Esper asked his own policy folks to backchannel the message. Milley’s message followed Esper’s.”

Milley wasn’t operating outside the chain of command in that case. Whether Esper was keeping the commander-in-chief in the loop is a separate question, yet to be answered.

But what about the January 8 call? Esper was long gone by then, having been fired by Trump in early November. Christopher Miller was the acting defense secretary at the time and therefore Milley’s superior. Did Miller ask Milley to reach out again to China or did Milley do that on his own initiative? It seems possible to me that Jennifer Griffin’s sources were describing how the October 30 call happened whereas Josh Rogin’s sources were describing the January 8 call, a moment when anxiety about what Trump might do in the grip of his mania about overturning the election was at its peak. What did Milley say to China’s general during that call — and were any civilian leaders aware of it?

Axios tried and failed to confirm Woodward’s claim that Milley told the general he’d warn him if the U.S. planned to attack. Instead a source familiar with the conversation told Axios that the gist of Milley’s message was “We’ll both know if we’re going to war… there’s not gonna be some surprise attack and there’s no reason for you to do a pre-emptive strike.” That makes it sound like he was just reiterating the October message, trying to calm the Chinese down before they started a war in the mistaken belief that the U.S. was about to hit first.

Of course, nervously warning a rival power that everything’s hunky dory in the White House and there’s no reason to worry, nosirree, risked doing more harm than good by convincing China that the U.S. was unstable and thus would be unable to respond effectively if the Chinese attacked.

Even if some civilian official like Miller was looped in on Milley’s chats with China, though, it seems likely that Trump wasn’t. The point of these conversations, after all, was to assure Beijing that the loose cannon in the Oval Office wasn’t actually loose — even though Milley, Gina Haspel, Nancy Pelosi, and doubtless many others thought Trump was deteriorating mentally, attempting to stage a coup, or both. If Milley was convinced that the commander-in-chief was no longer capable of performing his duties, he should have taken that immediately to the civilian leadership instead of assuming some of those duties, like diplomacy, himself. He could have told Mike Pence it was 25th Amendment time. Or he could have huddled with Pelosi and McConnell and said that the president needed to be removed ASAP as a matter of national security.

Of course, none of that would have worked. Even if the chairman of the Joint Chiefs of Staff and the head of the CIA — both Trump appointees, by the way — had gone public with their belief that the president was a crank in the grip of conspiratorial delusions about the election and seemed capable of anything, the GOP was and is too much of a cult of personality to do anything about it. Pence never, ever would have invoked the 25th Amendment. And Senate Republicans would have been too worried about what a removal vote would have meant to their next primaries to move against Trump in the interest of the country. So we’d have ended up with the country’s top military officer publicly accusing the commander-in-chief of being a nut, and then … nothing would have happened. The nut would have continued to have the nuclear launch codes for several more weeks until Biden’s inauguration (provided he didn’t figure out a way to pull off the coup after all). How would that have played overseas in terms of spooking rival powers to take risks?

None of that absolves Milley for not consulting the civilian leadership about his worries, though. Just because the effort to remove Trump through lawful means was doomed to fail didn’t justify him staging a “soft coup.” If in fact that’s what he did, which Tom Cotton believes is far-fetched. We’ll see when Milley testifies on September 28.

I’ll leave you with this new thread from Rogin. Note the fourth tweet alleging that none of these calls was done in secret.

4/? “…All calls from the Chairman to his counterparts, including those reported, are staffed, coordinated and communicated with the Department of Defense and the interagency…”

6/? “…The meeting regarding nuclear weapons protocols was to remind uniformed leaders in the Pentagon of the long-established and robust procedures in light of media reporting on the subject…”

7/7 “…General Milley continues to act and advise within his authority in the lawful tradition of civilian control of the military and his oath to the Constitution.”