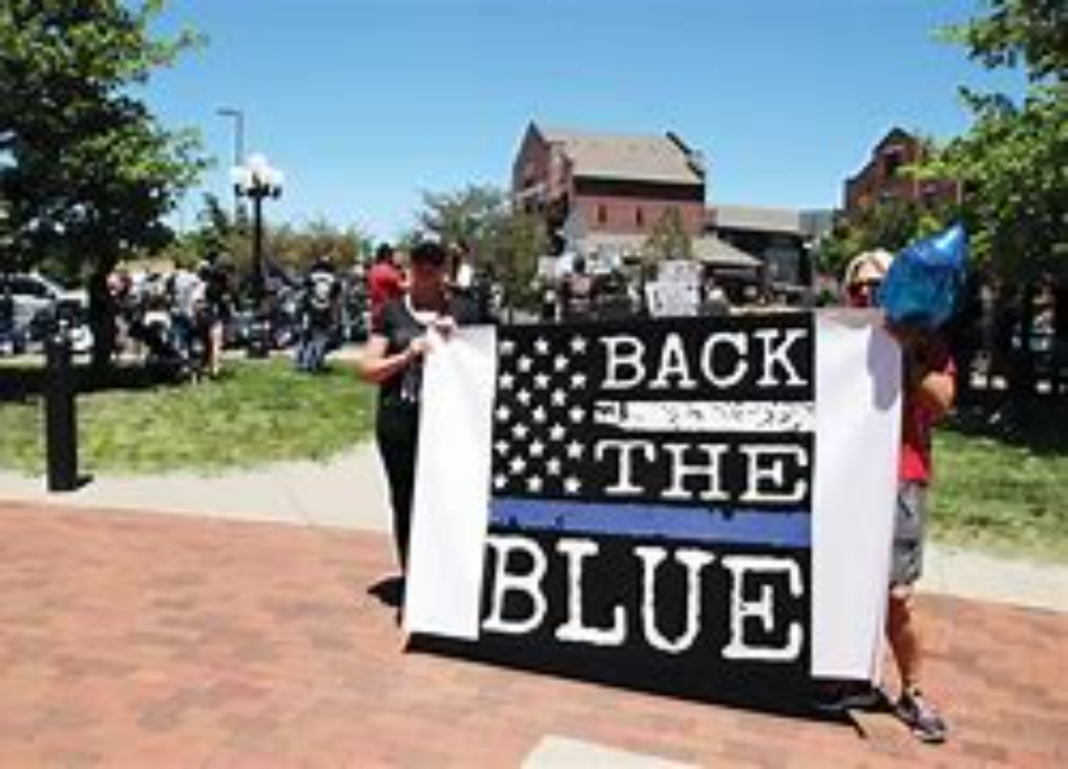 I’ve passed comment before, more than once, on the ambivalence we all feel towards the police and other law enforcement agencies.

We know we need them; we appreciate what a tough job they have; we want to support them and encourage them; but … it’s not always easy to do so whole-heartedly.

This is a zone where the personal collides with the political. In today’s America, for example, police are stood down when anarchist mobs burn and loot, beat and kill—because the political authorities are on the side of the mobs.

The most thoroughly politicized law-enforcement agency in the U.S., and the hardest one for normal citizens to support or respect, is the FBI.

It’s now beyond doubt that FBI carried out illegal surveillance on the 2016 Trump campaign and then on the Trump administration itself, all in support of the Russia-collusion hoax [Gregg Jarrett: In Russia hoax probe, fired FBI Deputy Director McCabe gives ludicrous defense of misconduct, Fox News, November 10, 2020].

He went to Washington, DC on January 6th to listen to Trump’s speech. He never got involved with the protests, was nowhere near any kind of disturbance, and can prove it—he was filming himself pretty continuously. He never breached the barricades or entered the Capitol.

Back in his mother’s apartment in New York in mid-February, Mr. Bolanos was woken by federal agents breaking down the door. The apartment was trashed, his property was seized, he was cuffed and interrogated for four hours. He was so distressed he suffered a stroke. Today, four months later, he still hasn’t been charged and his property still hasn’t been returned to him.

Apparently a neighbor had overheard him talking—the neighbor said “boasting”—about being at the Capitol. She had called the FBI hotline. Mr. Bolanos lives in New York City, remember: the beating heart of crazy gentry Leftism.

As Miranda Devine says, it’s like something you’d read about Communist China.

And it’s not just federal law enforcement that the regime has weaponized against dissent. The Unite the Right rally in Charlottesville, Virginia four years ago was deliberately wrecked, probably on orders from the Governor, by having the Charlottesville police stand down so that a lawfully-permitted protest could be attacked by Antifa.

Or you could ask my VDARE.com colleague Michelle Malkin about the Law Enforcement Appreciation Day she helped organize in Denver, Colorado last July.

Note the name of that event: Law Enforcement Appreciation Day. It was a Back the Blue rally. Like Unite the Right in Charlottesville, it was lawfully permitted. Also like Unite the Right, it was broken up by a BLM and Antifa mob—while police mostly stood by.

In fairness I should note that Michelle tells us

On Tuesday morning, a Denver police union official called me to apologize for the department’s failure to protect those of us who tried to speak on their behalf. The “backlash” for defending our constitutional rights was too high a price to pay, he told me. Sorry.

And in double fairness, I note that one police lieutenant refused to follow the stand-down order. He kept his officers on station, although they don’t seem to have done much to hold back the mob [Denver police union head: ‘Stand-down’ order was in effect when pro-cop rally attacked, by Bradford Betz, Fox News, July 22, 2020].

But if you still want to Back the Blue without reservations, check out what happened Tuesday this week, June 22, in Loudoun County, Virginia.

Yes, things are getting pretty rancorous in Loudoun County. I gave you a report just two weeks ago. A parent in the county, a lady who had grown up in Communist China, told the School Board that the Critical Race Theory they want on their schools’ curriculum seemed perfectly familiar to her:

“The communist regime used the same Critical Theory to divide people. The only difference is, they used class instead of race.”

The newsworthy event this week from Loudon County concerns a meeting of that same school board.

It wasn’t Critical Race Theory this time. The school board has put some draft proposals out for discussion concerning so-called transgender students—children who are confused about their sex.

These proposals would, in the words of The Washington Post (which of course is entirely sympathetic to them)

In short, male students should be allowed to play on girls’ sport teams and use girls’ restrooms, and teachers should have to memorize, for each of their dozens of students, whether a student wants to be addressed as he, she, it, they, ze, xe, per, ve, thon, spivak, popocatépetl, or honorificabilitudinitatibus.

This being Loudoun County, just thirty miles from the heart of federal power in Washington D.C., we shouldn’t be surprised that many parents spoke up in support of this lunacy. One of them thanked the school board for “having the courage to continue the righteous pursuit of equity and justice so that all students can thrive.”

The courage! The courage to march in lockstep with all the power centers of society: the media, the big corporations, the schools and colleges, the book publishers and TV talking heads, the banks and the churches! The courage, when the Ruling Class says “Jump!” to squeal back, “How high?”

Such courage! If we’d had the Loudoun County School Board in those landing-craft on D-Day, why, World War Two would have been over in a week.

It’s heartening to see, though, that even this close to the very center of Regime power, dissent is strong and unafraid. More than 250 people had signed up to submit spoken comments, maximum speaking time one minute each, and most of them were mad as hell.

That got cheers and applause from the room; and that was too much for the School Board. The Schools Superintendent, Scott A. Ziegler, Ed.D. [Tweet him/Email him], declared the event an unlawful assembly and directed people to leave. Several people refused; sheriff’s deputies—and the sheriff himself, apparently—moved in; and there were arrests.

This episode doesn’t reflect as badly on law enforcement as the other stories I’ve been telling. The meeting having been declared closed, that sheriff and his deputies apparently thought their duty was to clear the building and arrest as trespassers any who resisted.

On a strict point of law, they may have been right. And the final butcher’s bill wasn’t too bad: One guy got a summons for trespassing, another was charged with disorderly conduct and resisting arrest.

Still, video of the event—there are plenty on YouTube—plainly shows a lot of ordinary people, a high proportion young mothers, arguing for their right to speak out against the people running their public schools.

Ordinary people, normal people: not freaks and misfits dressed all in black, with hoods and covered faces. No neck tattoos, no nose rings or lip studs, no Molotov cocktails or eye-burning lasers. They didn’t look at all like they were setting out to loot the local Target store or burn down a police precinct.

Why couldn’t they have been left to depart from the building in their own good time? These were normal citizens concerned for their children. These weren’t Antifa or Black Lives Matter lunatics.

Of course, if they had been, the sheriff and his deputies would have headed to the donut shop.

Now let’s take a look from the point of view of law enforcement officers.

Two stories from the New York Post on successive days, June 20th and June 21st. And I should say, if you want to read the stories for yourself, I’m using the Post’s online version here. They sometimes have stories online that aren’t in the print newspaper, and the dates sometimes differ by a day.

Hundreds of alleged looters and rioters busted last year in protests over George Floyd’s murder by police have had their charges dropped, according to NYPD data—figures ripped as “disgusting” by a local business owner.

Although the rioting in New York City didn’t get much publicity nationwide, it was pretty damn nasty. As I reported at the time, they even looted Macy’s in Herald Square.

It wasn’t just Manhattan, either. In the Bronx there were bonfires in the street, I guess so that the looters had light to work by[ Bronx Streets Turn Chaotic As Looters Run Wild: ‘Fordham Is On Fire’ , by Lee Brown, New York Post, June 2, 2020].

The New York Post tells us that most of the people arrested have had their cases dismissed. A few—fewer than one in six—have been convicted on lesser counts like trespassing, which carries no jail time, while some smaller number have cases still open.

The District Attorneys’ offices blame the pandemic, which they say has stuck them with a huge backlog because the courts have been closed.

The small business owners who were the main victims here are mad as hell.

And so are city cops, who did after all make those arrests the DAs have dismissed. Quote from one, actually an ex-cop:

“If they are so overworked that they can’t handle the mission that they’re hired for, then maybe they should find another line of work.”

So even when cops buck the politicians and do their jobs as they should, they get shafted by Lefty-Progressive District Attorneys and prosecutors.

You can see the appeal of the donut shop.

It’s actually worse than that for street cops. Here’s the New York Post story from the following day, June 21st:

The Civilian Complaint Review Board has recommended discipline against 39 officers, including police brass, over their response in last year’s George Floyd protests, according to a new report released Monday.

Goodness, there must have been some serious abuses of authority there by cops. What did they actually do?

This New York Post story doesn’t supply many details, but we do learn that Officer Enrico Lauretta had a pair of complaints sustained for “discourtesy and offensive language after flashing a white power sign during a June demonstration.”

If you follow the news, you know that well-nigh any configuration of the hands and fingers is a “white power sign” to somebody somewhere—unless you’re holding your hand straight up with palms out and fingers straight in obvious surrender.

As for “discourtesy and offensive language”—What’s a cop supposed to say when the mob has set fire to a police vehicle, his colleague just got knocked out by a frozen water bottle, and a crowd of looters are emerging from a jewelry store with armfuls of merchandise?— “Excuse me, gentlemen. May I have a word with you?”

Policing is rough work. Not all of it can be carried out while speaking in the diction of a doorman at the Waldorf Hotel.

Bottom line here on the law-enforcement theme: No thoughtful person can declare himself pro-cop or anti-cop without qualification, except perhaps in the case of the FBI, which looks to be thoroughly corrupted and needs to be pulled down and rebuilt.

State and local cops have a lot to put up with from idiot politicians and DAs bought and paid for by George Soros.

For what needs fixing, especially at the local level, the answer is what it always is: get involved and elect the right people. Make a ruckus, like those Loudoun County parents.

Colonel Max Morton warned us back in April, “There is an authoritarian leviathan coming for traditional America.” [Back the Blue That Backs You, American Greatness, April 17, 2021]

Let’s try to make sure that local law enforcement, at least, is on our side.