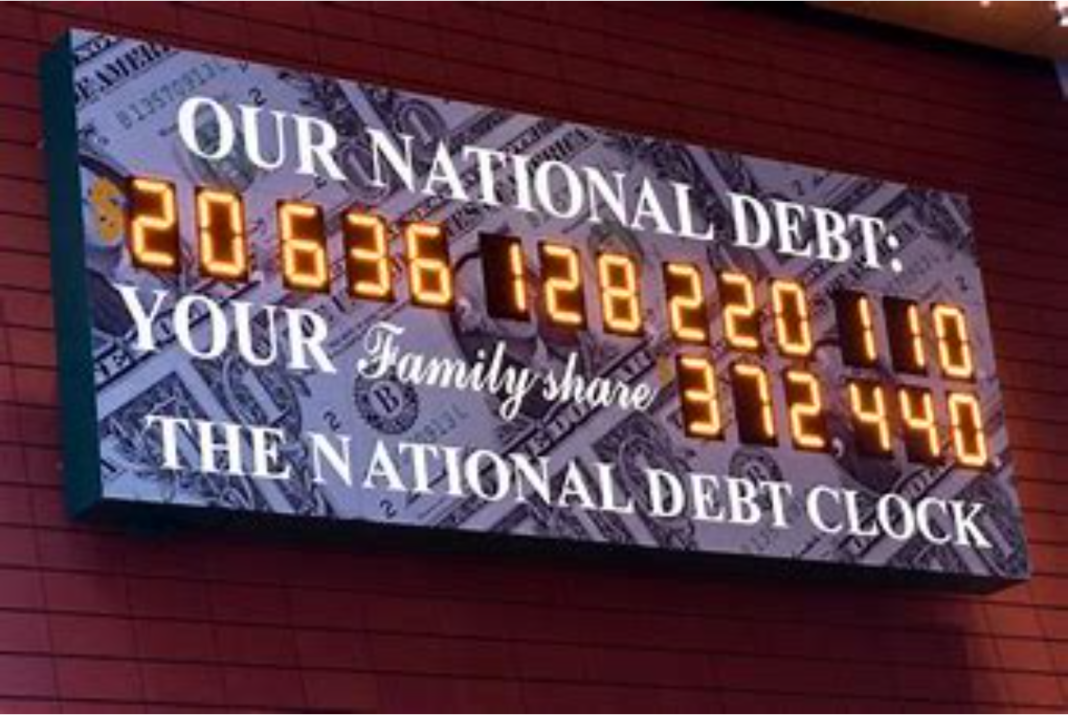 If you have had quite enough seasonal cheer for now, I’d like to recommend Brian Riedl’s latest paper for the Manhattan Institute (How Higher Interest Rates Could Push Washington Toward a Federal Debt Crisis) as an antidote to all that.

Gloom about a coming national debt crunch is nothing new, and yet here we still are. Nevertheless the formidable case that Riedl has put together (and the numbers he has used to back it up) is yet another reminder of the scale of the gamble that is being taken with the country’s finances and, by not much of an extension, its future. Math is math. Hope is hope. I know which I think is the better guide to what’s coming.

Here are some of Riedl’s numbers:

Economists have asserted that fiscal consolidation is unnecessary because Washington’s current debt level of 100% of GDP has not proved unaffordable or economically damaging. Leading economists have asserted that expensive new fiscal expansions are justified until the debt reaches 150% of GDP. Yet this framework fails to take into account that Washington is already projected by the Congressional Budget Office (CBO) to run $112 trillion in additional baseline deficits over the next three decades, which will push the debt past 200% of GDP. At that point, annual deficits are projected to top 13% of the economy (the equivalent of nearly $3 trillion today), and interest payments on the debt would be the largest federal expenditure, consuming nearly half of all tax revenues.

And that is before taking President Biden’s next round of budget proposals (which will presumably see the light of day at some point) into account.

The second questionable assumption that the debt doves make is that today’s low interest rates paid on this debt will continue forever. The average interest rate paid on the national debt has fallen from 8.4% to 1.4% since 1990. This decline was not forecast by economists, and many disagree on its specific cause. Yet many economic commentators have expressed an unshakable confidence that relatively low interest rates will essentially continue forever. If they are wrong, the combustible combination of surging debt and rising interest rates at any point in the future would risk a debt crisis. Even interest rates of 5% could push the national debt toward 300% of GDP within three decades, if paired with modest new fiscal expansions in the meantime.

Riedl spends quite a bit of time on the likelihood that today’s ultra-low interest rates (which are not — the minor matter of helping keep the country afloat aside — the unalloyed good that is often assumed) will, in fact, persist. Something he factors into his calculations is that, contrary to quite a bit of today’s conventional wisdom, the connection between heavier government borrowing and higher interest rates has not been broken. Instead the resulting increase in borrowing costs has been more than offset by other factors (the global savings glut and so on) pushing in the other direction, but for how long will that state of affairs continue?

Assuming that each percentage-point increase in the debt continues to raise interest rates by 3 basis points, the projected 100% debt-to-GDP increase over the next three decades should, all else equal, push interest rates up by 3 percentage points. To maintain today’s low interest rates, therefore, it would not be enough for those offsetting factors to remain constant; they would have to accelerate even further, in order to drive an additional 3 percentage- point interest-rate decline.

That is quite some assumption. Feeling lucky?

In fact, there are reasons to believe that some of the forces that have helped drive down rates are coming to an end and may even go into reverse. For example, Boomers are not going to keep saving forever.

There’s also this to think about:

The Federal Reserve could be expected to raise short-term interest rates over time because of faster economic growth or any uptick in inflation. On the flip side, if central banks weaken their commitment to containing inflation, the resulting price volatility could induce borrowers to demand a higher inflation-risk premium. Rising inflation rates can be difficult to reverse and can raise long-term market expectations of inflation. Such developments would reduce the “flight to safety” appeal of holding Treasury bonds.

There is also the awkward question of who, over time, is going to buy those bonds. I’ve long been skeptical about the notion that the U.S. can rely on China to keep taking our debt, a skepticism that has only increased with the growing tension between the two countries.

Ray Kroc, the man who made McDonalds into the giant it has become (reportedly) once said:

If any of my competitors were drowning, I’d put a hose in their mouth and turn on the water.

Something tells me that Xi sees things the same way.

Worst still, the general perception (well, mine anyway) of existing Chinese willingness to buy treasuries may be — how to put this — overstated. But what about Japan?

The national debt held by the public—currently $23 trillion—is projected to grow by an additional $112 trillion over the next 30 years, even if no additional spending programs or tax cuts are enacted. Who will supply this large amount of lending? China and Japan have financed just 1% of all federal borrowing over the past decade…During a period [Dec 2011-May 2021] in which the debt held by the public soared from $10.4 trillion to $22.1 trillion, the amount of combined debt held by China and Japan merely inched up from $2.2 trillion to $2.3 trillion…

Can American savers and investors finance $100 trillion in federal borrowing over 30 years? Possibly, but it will be a heavy lift, given that they currently hold just $10 trillion in Treasury assets. It is entirely plausible that the Treasury will need to offer higher interest rates to induce this level of lending.

And those higher rates are going to (in all probability) increase the pace at which that debt is increasing. Images of an ever-accelerating treadmill come to mind.

Washington overwhelmingly relies on short-term borrowing, with an average maturity of 69 months. Consequently, if interest rates rise at any point in the future, nearly the entire national debt will roll over into those higher rates within a decade.

I don’t know why the U.S. has not pushed out the maturity of its debt at current very low rates, but if a market exists for very long-term U.S debt at these levels (I’ve seen a report or two suggesting that it doesn’t, at least in any size, although Riedl believes that such concerns are overstated), it’s an opportunity being missed, and yet another reckless bet that is being taken.

At this point, I’m busy trying to choose between noose, poison, and razor blade, and so I’ll leave you to turn to the full report to learn more, but I’ll just conclude by noting (again, in fact, but I cannot find the link) that I attended a talk during the financial crisis by a (very) senior investment banker on the national debt (then, of course, at far lower levels). When the crisis hit, he said, it would do so very suddenly.

I don’t remember if he used the phrase “over a cliff.” Then again, he didn’t need to.

Biden seeks to Cut Greenhouse Gas Emissions in Half by 2030