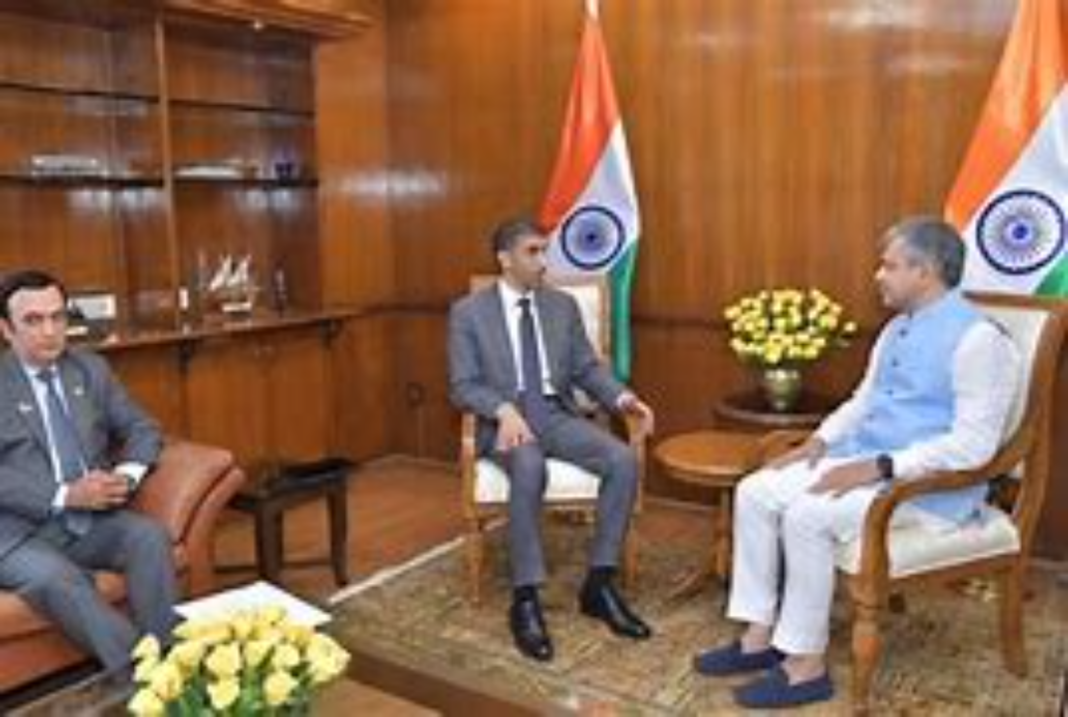 The United Arab Emirates and India commenced their discussions on a Comprehensive Economic Partnership Agreement with Dr. Thani Al Zeyoudi, Minister of State for Foreign Trade, meeting Piyush Goyal, India’s Minister of Commerce and Industry, to outline how the two nations can accelerate bilateral trade, investment and economic opportunity.

The UAE delegation arrived in India on September 21 for a four-day visit to the Indian capital New Delhi, as the two sides seek ways to strengthen their economic ties through a Comprehensive Economic Partnership Agreement (CEPA).

The talks mark the beginning of a new era of strategic cooperation between the two countries, which it is hoped will broaden economic and investment opportunities and push bilateral trade beyond $100 billion in five years.

In the discussions with Goyal, Dr. Al Zeyoudi restated the UAE’s belief that expanding trade expands opportunity, stability, and prosperity, and that closer ties between the UAE and India’s economies can offer fresh impetus to the global recovery.

Dr. Al Zeyoudi also reiterated the UAE’s recent “Projects of the 50” initiative, which seeks to further enhance the country’s advantageous regulatory environment, attract global talent and accelerate the adoption of Fourth Industrial Revolution technologies into manufacturing, healthcare, smart services logistics and renewable energy –- all of which provide areas of collaboration, investment and mutual benefit that can be unlocked through the CEPA.

In talks with Scindia, Dr. Al Zeyoudi outlined the importance of the sector to both India and the UAE and highlighted the potential for greater connectivity between the two nations, which can have a multiplier effect for trade and tourism.

The two discussed the potential for increasing seat capacity for UAE carriers flying from India during the forthcoming Expo, as well as expanding the number of airports offering direct services to the UAE.

The possibilities of how the CEPA can create new opportunities in the ICT and telecommunications industries were discussed in the meeting with Vaishnaw. The talks brought forward the possibilities of knowledge transfer, 5G capabilities and greater foreign direct investment.

In the final meeting of the day, Dr. Al Zeyoudi met with Sitharaman to explore how the CEPA can expand on the strength and depth of the economic and commercial engagement between the UAE and India.

Of particular note was UAE’s growing fintech sector, which expected to increase by 20 percent per year over the next five years. The potential of India’s fintech sector is also promising, which is currently valued at $31bln and expected to grow to $84 bln by 2025.

Speaking on his arrival in New Delhi on Tuesday, Dr. Al Zeyoudi said that the CEPA should be seen as a natural extension of the long-standing relationship between the two countries.

“The CEPA builds on our historic ties by laying the foundation for a mutually beneficial partnership that creates new jobs, promotes foreign direct investment, empowers entrepreneurs, attracts talent and accelerates our knowledge-driven economies –- and it will drive economic growth and prosperity across the region,” he added.