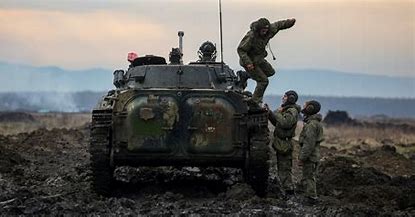 If things get rough over Ukraine in the next few weeks, I’m not entirely convinced that Germany is going to be the most reliable of allies.

Germany is blocking North Atlantic Treaty Organization ally Estonia from giving military support to Ukraine by refusing to issue permits for German-origin weapons to be exported to Kyiv as it braces for a potential Russian invasion.

Unlike the U.S., Britain, Poland and other allies, the German government has declined to export lethal weapons directly to Ukraine.

In the case of Estonia, a small country on Russia’s northern border, Berlin is also refusing to allow a third country to send artillery to Ukraine because the weaponry originated in Germany, according to Estonian and German officials…

“Originated in Germany”?  Yes and no.

Via the Moscow Times:

The howitzers originally belonged to East Germany, then Germany and were bought by Finland in the 1990s. Finland and Germany would have to give their approval for Estonia to send them to Ukraine.

And to repeat a quote from the other day (via Euraktiv):

Germany reiterated its refusal to send defensive weapons to Ukraine that according to Kyiv would help the country fend off a potential Russian invasion. This comes as part of a new German peace policy that aims at restricting arms exports and fostering peace via diplomacy.

Wolfgang Münchau in the Spectator:

The general tone in the German media is one of bewilderment that foreigners even take an interest in this pipeline [Nordstream 2]. One of the few journalists who has raised concerns is the Swiss Mathieu von Rohr at Der Spiegel, who argues that the ruling Social Democratic Party (SPD) has a ‘Russia problem’. That is a polite way of putting it. It’s more the case that parts of the party — former Chancellor Gerhard Schröder, for sure — are firmly on Team Putin. Christine Lambrecht, Germany’s Defence Minister, is one of the countless other SPD politicians who insist that Nord Stream 2 has nothing to do with politics.

One expression of Germany’s longstanding ambivalence is its notorious refusal to acknowledge that hard power is a legitimate and necessary instrument in the toolkit of diplomacy. This mentality originated in atonement for the Nazi past. But it’s long since become a convenient excuse to skimp on military spending and hang back when the alliance needs to send troops into harm’s way.

Mixed into this faux-pacifism is a bizarre strain of Russophilia, usually accompanied by thinly disguised anti-Americanism. This phenomenon is strongest at the political extremes — within the populist Alternative for Germany on the far right and the post-communist Left Party. Both are disproportionately popular in the former East Germany.

But Russophilia is also widespread among the center-left Social Democrats, which now run the government under Chancellor Olaf Scholz. In their mythology, the Cold War was won not because the West stared down an “evil empire,” but because German Social Democrats initiated rapprochement with the communist bloc, meaning Moscow. Their mantra: Talk to the Russians long enough, and everything will be fine.

Kluth notes that German’s new foreign minister, Annalena Baerbock (who is a Green), “bears no blame for any of this.” That’s being a little charitable. The Greens have long, as a matter of more general principle, been uncomfortable about arms sales, and so far as Ukraine is concerned, Baerbock is clearly a supporter of the current embargo.

Her party has in recent years edged away from its traditional anti-Americanism and become more Atlanticist. During last year’s election campaign, she called out both Russia and China for their aggression and demanded that Germany side firmly with the West. She also wants Nord Stream 2 stopped.

But now her Greens are members of Scholz’s government and must keep the peace. How Germany would respond to a renewed Russian invasion of Ukraine is, therefore, unclear. The West has promised to answer with sanctions. Of these, one of the toughest would be nixing Nord Stream 2. But to take that step, the Greens and the third coalition partner, the Free Democrats, would have to prevail over the Social Democrats.

They won’t. Canceling Nordstream 2 would inevitably lead to a further leap in German (natural) gas prices, as Russian gas may currently (the figures vary from month to month) account for roughly half of Germany’s supply. While (and this is often overlooked amid all the hullabaloo over gas) Germany has other sources of energy (“only” around 15 percent of Germany’s electricity was generated by gas last year), but gas is, Reuters reports, critical for home heating (it is used in about half of German households) and in certain manufacturing sectors.

As I’ve noted before, there has been a massive surge in gas prices in Europe, some of it, doubtless, helped along by a spot of Russian tweaking. In another report, Reuters notes that “energy prices in Germany in December were up 69% compared with December 2020.” That’s not going to help anyone, but it will hit the lowest paid hardest, and they disproportionately support Scholz’s SPD.

The writer of that report also quoted Thorsten Benner of the Global Public Policy Institute (GPPi):

For Scholz, there is also a concern about fairness: the U.S. is a major importer of Russian crude but hasn’t committed to stopping imports while Germany is expected to call off Nord Stream 2.

It’s no secret that the administration’s grudging attitude to domestic U.S. fossil fuel production is going to have unsettling geopolitical consequences (notably the increased leverage it gives to Putin and OPEC), but I hadn’t thought of the impact that it might have on Germany’s internal political debate, and the geopolitical impact of that.

Benner also observes that around 60 percent of Germans back Nord Stream 2.

So will Nord Stream 2 be cancelled?

Secretary of State Blinken, speaking in Berlin on Thursday:

It’s fair to say that the United States has no better partner, no better friend in the world than Germany.

Diplomats sometimes have to lay on the flattery, even when they know that it’s nonsense. But there are occasions when that flattery conveys a clear sense of weakness. This was one of those times.