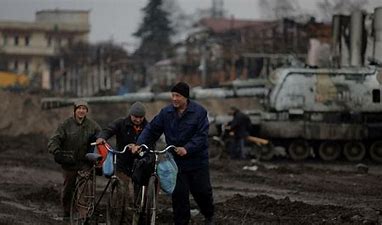 Putin’s forces may yet crush the Ukrainians. A sobering, and excellent, column comes from Bret Stephens: here. But the Ukrainians are putting up an extraordinary fight. Here in the West, I find that some Putin-friendly types, on left and right, are nervous. Crabby, even. The Ukrainians were supposed to capitulate. Or embrace their fraternal invaders. Or be quickly squashed. And they are not cooperating.

• For years, we heard drooling — can you hear drooling? — over the Russian military. How butch, how macho, it was — unlike us sissies in the West. Putin’s guys seem pretty good at killing unarmed women and children, as they try to flee. But the Ukrainian military is holding its own, for now.

Which is an eye-opener.

The question is often raised: Why doesn’t the Kremlin know anything about Ukraine? The short answer is massive imperial Russian contempt, but let me elaborate. During decades of meetings in Moscow, whenever talking about Ukraine, you received the reaction “yes, small Russians.”

Quite so. Do you know the nickname of Tchaikovsky’s Symphony No. 2, “Little Russian”? It does not refer to a short Muscovite or Petersburger.

• I thought Garry Kasparov had it exactly right:

Ukrainian courage and public pressure are why the free world leaders flipped to supporting Ukraine aggressively instead of their usual middle path with Putin. That public pressure must increase, not ease just because Russia is changing its tune.

• Oleh Sentsov is an extraordinary man. I first knew him, so to speak, as a political prisoner — a prisoner of Putin’s. He is also a filmmaker, well-known to people who follow these things. Today, he is fighting for his country, in the Ukrainian military. Eliot Ackerman talked to him, in Kyiv.

How much drama, or turbulence, or hardship, can be packed into one life? (A lot.)

• As Radek Sikorski says, “Putin can’t take Ukraine so he’s taking its people. Dozens of civilians have been abducted and thousands more deported to Russia. These war crimes have names and faces.”

Yes. I understand that what’s happening in Ukraine is a war. There are two militaries, and foreigners joining each side. (Belarusians, Georgians, and others are fighting alongside the Ukrainians, Putin is importing fighters from Syria.) But, some days, we see more war crimes than war. This is an assault on — the terrorizing of — a people.

• In the Wall Street Journal, an article is headed “Taiwan Looks to Ukraine War for Ideas to Defend Against China.” The PRC is taking great interest in the war, learning from it. So is the Taiwanese democracy.

• Did you see this? “Trump calls on Putin to release info on Hunter Biden’s dealings with oligarchs.” (Article here.) We all have our priorities.

• On Russian state TV, a host called for regime change in America “and to again help our partner Trump to become president.” Dang.

• One American featured on Russian state TV is Douglas Macgregor, the retired U.S. Army colonel whom Trump nominated to be ambassador to Germany. (The nomination was blocked by the Senate.) Macgregor says things such as “Russia is avoiding civilian targets and casualties.” A classic type — present in every war, in every era.

• Russia was once a member of the G-8. But then Putin aggressed against Ukraine in 2014, and Russia was suspended from the group — which became the G-7. While he was president, Trump pushed for Russia’s readmission to the group (though the facts on the ground had not changed at all). He was not successful in this. Russia is still a member of a bigger group: the G-20. Should it be? Not at all, says Jim Geraghty (and I strongly agree).

• The V4 is the Visegrád Group, comprising the Czech Republic, Slovakia, Hungary, and Poland. This is a very interesting development: A meeting of the V4 was called off because the Czechs and the Poles objected to Hungary’s — to Viktor Orbán’s — warm relations with Putin. To read an article, go here.

Orbán has gone along with some sanctions. That is, he has not vetoed certain sanctions by the European Union. But he will not allow weapons to Ukraine to cross Hungarian territory, etc.

• Marine is doing pretty well, you’ll be happy to know (or not). In France, Marine Le Pen is “closing the gap” between her and Emmanuel Macron, as this article says. They are running for president. Is Putin a liability, in Western electorates? Not necessarily. Autocrats always have their fans, always.

This is a bitter fact to discover, maybe, but discover it one does, somewhere along the road of life.

• Get this, from Bellingcat, that invaluable research consortium:

Bellingcat can confirm that three members of the delegation attending the peace talks between Ukraine and Russia on the night of 3 to 4 March 2022 experienced symptoms consistent with poisoning with chemical weapons. One of the victims was Russian entrepreneur Roman Abramovich.

# Listen to this, from Sergej Sumlenny:

In many tapped phone calls between Russian soldiers and their relatives (Russians steal UKR mobile phones, use them, SBU taps) they tell the same story: how rich Ukraine is, how much they have looted, and how cool ppl lived here. Some saw asphalt and street lights for the first time.

This is how the Red Army reacted when they got to Poland, Hungary, Czechoslovakia and then especially Germany in 1944-45. Some of them went mad with fury that the capitalist world they had been told was failing turned out to be richer than the USSR.

Sumlenny pointed out that some people think of Russia as well-off and Ukraine as not. More like the opposite is true. Moscow and Petersburg are well-off, sure. But Russia is vast. And foreigners seldom wander beyond those great cities.

Years ago, Richard Pipes was on a city bus, somewhere in the Soviet Union. A woman, having noticed the foreigner, began to extol the virtues of her city and country, in a loud voice, for all to hear. “What country can compare to ours! We have everything.” Before she got off the bus, she sneaked up to Pipes and said, “Please, tell me the truth: We live like dogs, don’t we?”

She knew. Or suspected.

• Mona Charen has contributed an outstanding column — another one. It is informed, judicious, compelling — Charenesque. “Is It Racist to Help Ukraine?” Certainly not, says Mona. You will hear people say that the United States is interested only in helping light-skinned people, not in helping the dark-skinned. Mona disproves this, smashingly.

In order to strengthen Lithuania’s national defence, from now on, members of the professional military service, the National Defence Volunteer Forces and the Lithuanian Riflemen’s Union will be allowed to purchase and keep automatic rifles of the highest category in their homes.

• Finally, I was pleased to read this report, from Cleveland:

Preparations are underway across Northeast Ohio for thousands of Ukrainian refugees who are expected to arrive soon.

Millions of Ukrainians have fled their homeland and into neighbor countries with only the clothing on their backs and what they could carry.

Here is some more:

Joe Cimperman, President of Global Cleveland, says Northeast Ohio is a target location for a couple of reasons.

“Cleveland is the third largest Ukrainian community in the United States, Cleveland and Northeast Ohio, so Cleveland’s already been a center for centuries for people from Ukraine,” said Cimperman. “And there are a lot of connections still here.”

Global Cleveland has been collecting donations and organizing volunteers for when they arrive.

Cimperman says, charities, churches, businesses and lawmakers have all been working together.

More than 200 volunteers have also offered help with everything from housing to finding jobs.