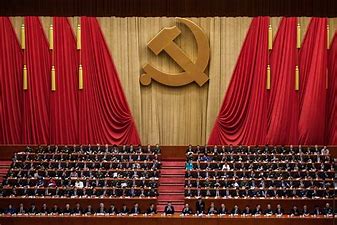 A dissident Chinese artist that goes by the name of Badiucao released a collection of posters that depict the evils of the Chinese Communist Party with a Winter Olympics theme. Members of the GW Chinese Students and Scholars Association complained about the posters being displayed on campus. What did the president of the university do? He said he was personally offended by the artwork. He promised that they would be immediately removed.

Mark S. Wrighton, president of George Washington University was told by the Chinese students that the artwork is an “attack on the Chinese nation”, had “serious racist views” and constituted “extremely vicious personal attacks on all international students.” “Punish them severely!” requested the CSSA. “Punish them severely”? Those brainwashed Chinese students must have forgotten which country they are in. What do they suggest? Imprisonment? Re-education camps? Who exactly should be punished? Should it be the artist, who is Chinese and living in Australia, or the person who put up the art? Perhaps someone should be lashed in a public space as a warning of what may happen if anyone else dares to speak out against the Communist Chinese Party on an American college campus. Good Lord.

Instead of supporting the artwork of Badiucao, Wrighton embraced the complaints from those students who may or may not be pawns of the CCP on campus. It is known that the CCP uses students and facility to spread its ideology on American campuses.

Please know that I am personally offended by these posters. I treasure the opportunity to work with talented people from all over the world, including China. Your reaching out to me directly is much appreciated, and we are working to have all of these offensive poster removed as soon as possible. I, too, am saddened by this terrible event and we will undertake an effort to determine who is responsible.

I demand him an explanation why exposing CCP’s abuse offends him. pic.twitter.com/Bm5k2nFAJ4

The artist, known as the Chinese Banksy, has a long thread on Twitter. He explains that the art has been displayed all over the world.

1. Very proud that my Olympic posters have grown into a global symbol for boycott #Beijing2022  from Miami streets to major news frontpage in Czech；from hundreds years old museum in Italy to Blockchian as #NFT.

This is a timeline thread for its complete displaying around world pic.twitter.com/QgHZCaviF2

Badiucao has launched a NFT collection.

4/ HRF also worked with exiled Chinese dissident artist and Havel Prize Laureate @badiucao to showcase his 5-piece #Beijing 2022 Collection, which was initially released at the 2021 @OsloFF, along with 3 never-before-seen pieces. https://t.co/oZlBrV9ato

There is a diplomatic boycott by the United States and some other countries, including Australia where the Chinese dissident resides. The artwork is harsh. It depicts human right abuses by the Chinese Communist Party, specifically its treatment of the ethnic minority Uyghurs. While diplomatic boycotts are a first step, they will not change anything. Nothing will change until IOC stops awarding brutal dictatorships the privilege of hosting the Olympic Games. After the 2008 Olympics, the CCP pledged to make their record on human rights better yet that hasn’t been the case. If anything, the CCP is harsher now on its citizens than it was in 2008. President George W. Bush attended the 2008 Summer Olympics in Beijing to support American athletes.

The country has evolved from being primarily a global manufacturing hub to boasting some of the world’s top tech companies and financial centers. Beijing is immensely proud of its economic achievements, as well as its authoritarian one-party political system, which it sees as more resilient than Western democracy.

Since 2008, China has also tripled military spending to more than $200 billion in 2021, compared with $700 billion in the U.S. Beijing launched its first aircraft carrier in 2012, and continues to develop an ambitious space program.

“The Chinese people have never been as confident about their future as they are today,” said Victor Gao, a chair professor at Soochow University in China, who was an interpreter for paramount leader Deng Xiaoping. “They do believe that China’s peaceful rise is inevitable.”

The technical and financial angles of China in the world economy is why so many free people are afraid of speaking out and angering the CCP. Look no further than sports companies and franchises, along with American consumer products – looking at you, Coca Cola – to see that human rights take a back seat to profits. In this story’s case, the president of an American university, a private university, made the decision to kowtow to a group of Chinese students instead of speaking up for the American values of freedom of speech and the right to protest.

President Xi is not afraid to challenge the United States or other countries. Frankly, with Joe Biden in the White House, that attitude is predictable. After the botched withdrawal from Afghanistan, he is seen as weak and inept on the world stage. Who knows what kind of deals that Biden, Inc. has made with the Chinese? Where is Hunter? The Big Guy always gets ten percent. Biden’s compromised.

President Xi Jinping is on track to become the most powerful Chinese leader since Mao Zedong, the founding father of the People’s Republic of China, and with him at the helm the nation has grown more assertive and ambitious. A constitutional change in 2018 and a “historical resolution” approved by the ruling Communist Party in November have paved the way for Xi, 68, to secure an unprecedented third term in office at a party congress later this year.

“We will never allow any foreign force to bully, oppress or subjugate us. Anyone who would attempt to do so will find themselves on a collision course with a great wall of steel forged by over 1.4 billion Chinese people,” he said in a speech last summer marking the party’s centennial.

I’m old enough to remember when it was liberals who spoke up for human rights around the world. Times have certainly changed.

Now imagine my art permanently display in @GWtweets for remind this university not to make a mistake like this again.

I will be happily to donate my art https://t.co/oZDwzwAK9Q

If George Washington University’s president is “personally offended” — as it appears he wrote in an email — by @badiucao’s pictures including of a guy skating over the Hong Kong flag’s flower insignia, wait until he finds out what happened to actual Hong Kongers. CC: @GWtweets pic.twitter.com/MPQVON46Tb

***I have an update to this post before it is even published. Turns out that the pushback from sane Americans was strong enough to get President Wrighton to change his tune.

.@PresWrightonGW issues statement saying apology for and removal of dissident art by @badiucao on campus were mistakes, done without understanding of the posters, in reply to student complaints.https://t.co/aZvLhRyeUR

Last week, the university learned of posters on campus depicting images that alarmed some members of our community, and we began to receive a number of concerns through official university reporting channels that cited bias and racism against the Chinese community. I also received an email directly from a student who expressed concerns.

At that time, and without more context on the origin or intent of the posters, I responded hastily to the student, writing that I, too, was concerned. University staff also responded to ensure the posters were removed. These responses were mistakes. Every member of the GW community should feel welcome and supported, but I should have taken more time to understand the entire situation before commenting.

I have since learned from our university’s scholars that the posters were designed by a Chinese-Australian artist, Badiucao, and they are a critique of China’s policies. Upon full understanding, I do not view these posters as racist; they are political statements. There is no university investigation underway, and the university will not take any action against the students who displayed the posters.

I want to be very clear: I support freedom of speech—even when it offends people—and creative art is a valued way to communicate on important societal issues. I also support the many students and faculty at our university who are engaged in researching, and actively advocating against, all forms of discrimination, marginalization, and oppression.

Our university’s scholarship, research, and support for those among us who need it most are the reasons that this great institution has fulfilled its mission for more than 200 years. As we embark on our third century, I am committed to upholding our mission and ensuring our community has the support to continue this critical work.

Gosh, he just found out that the artist is Chinese so it isn’t racist, huh? Maybe next time he’ll take a beat and actually look into what it is before so easily condemning something to appease complaints. This is clearly political artwork. Did he not even look at it before he ordered it taken down? You’ll note that in his statement, he acknowledges it was a mistake that he condemned the art and ordered it taken down but he doesn’t actually apologize. That’s standard practice these days. It’s a non-apology apology. He’s justifying his wrong-headed reaction instead of just apologizing.

Sandy Hook: Gun Maker Offer a $33 Million in Settlement to...