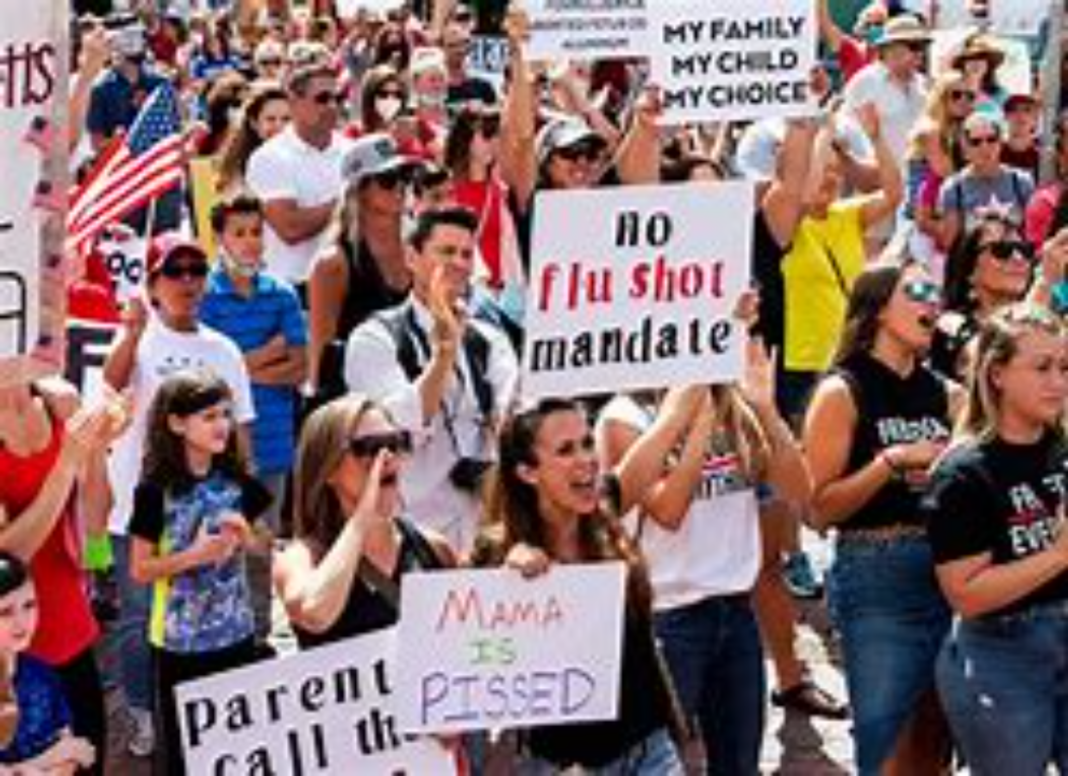 Charlotte, NC — Stop me if you’ve heard this one before: In order to travel, purchase, be employed, invest, have a bank account, send your kids to school, or actually be in public, you will need a set of documents that prove you have the right do to any of these things.

That’s it; there is no punchline.

And you should have stopped me: you HAVE heard this before. Germany, Venezuela, China, Russia, Cuba …

Straight from Wikipedia: “Your papers, please” is an expression or trope associated with police state functionaries, allegedly popularized in Hollywood movies featuring Nazi Party officials demanding identification from citizens during random stops or at checkpoints.[1]

But the Biden Administration has already said, it will not impose a federal vaccine passport policy. It couldn’t, given the current legal obstacles:

“[T]he U.S. does not have a national database for immunization records that could act as the source of vaccination data for use in digital passes. A national system to create a unique identification number to link the health records of every American has been banned since 1998, spearheaded by then-Rep. Ron Paul (R-Texas), who said such a system would be an unwarranted privacy intrusion.”

Nice speech, but with prohibition and what not it would seem that the Government could easily change its mind. And as far as an “invasion into privacy” I am not sure I can even type that without breaking into tears of laughter. No good crisis should ever go to waste.

In the case of the US, what really happens is the states can step in and determine if they will have a policy; or punt the responsibility over to private businesses in the same way they did with mask, eviction, and distancing mandates. Along with appropriate penalties if said businesses do not “voluntarily” comply.

All of a sudden the Gum’ment has NO problem with backing off and letting the states and individual businesses handle their own affairs.

Of course, the states will opt to do EXACTLY what the government wants them to do; why we could even see nonjudicial entities (such as the CDC) making ‘recommendations’ that suddenly become law.

Even this seems somewhat impractical. In a country that can’t seem to get its collective crap together concerning Voter ID cards, it seems unlikely that the Vaccine card is going to come about.

But then again, I’ll bet that I am wrong. In fact, I see exactly such a mechanism showing up, either digitally or a physical card. It’s a miracle, I tell you.

Because forgeries of the physical cards will be in such high circulation the efficacy of such a protocol will be a “shoe laces tied at the starting gun” sort of thing.

Which leaves us with a digital system. The sheer impracticality of this system is where it will fall apart.

Each country will need to have its fingers in the mix, at least as far as various requirements.

The biggest problem is the disparate nature of the information. Although plenty of apps are trying to be the first in line to fill this need, each fulfills different requirements, with none of them being universally accepted. (And no central database exists by which to verify records)

New York awarded IBM with the task of building out Excelsior Pass. One can get the app for free and upload negative test results or your vaccination records to it. From there one can present the information (along with photo identification). Upon request, of course-by someone with a gun over their shoulder.

Roughly 2 million people have downloaded the app and the businesses need only get the corresponding app to scan and verify the QR codes.

But on the other end, you have states like Florida that banned vaccine passports; Yet another roadblock in getting nationwide acceptance of the “passport.”

The digital information is in the various healthcare and health insurance networks. Clear and Carbon Health both have a considerable number of health records they can tap into for their apps. HIPAA can get stuffed.

As usual. in the US the physical cards are accepted everywhere and they are also the least likely to be authentic or accepted internationally.

Now take the issues seen in the US, and let’s scale that up to an international level. Exactly how many apps would be needed for a traveler?

Each administrator of a test or vaccine would have to sync their systems up to each of those apps to verify information, and each venue, business, or jurisdiction would need to likewise carry a corresponding app by which to scan and verify information.

And, this is all on top of the contact tracing apps in some of these places, including the ones that Apple downloaded without permission on the iPhone a year or so ago.

The EU, China, and Japan are each working on their own vaccine passport. The EU is set to roll one out this summer. but as they have no border checkpoints within the EU, one wonders how would they check on someone’s immunity status? And it’s STILL a safe bet that none of these guys will not accept anything from the U.S. given the current world mood.

Each country is coming up with its own rules, and perhaps at airports and train or bus stops they could scan their pass. International air carriers are collaborating on their own projects:

The International Air Transport Association, an airline industry group, has its smartphone IATA Travel Pass, which airlines including Qantas, Japan Airlines, Emirates, British Airways and Virgin Atlantic have signed up to. A rival effort, the nonprofit CommonPass, has gained traction with carriers like Cathay Pacific, JetBlue, United and Lufthansa.

The individual liberty aspect of this is alarming to say the least. I am trusting a lot of different players with not just my shot records (which may or may not be unto themselves consequential), but with biometrics of my face tied to those records.

Luckily, Gum’ment officials are always conscientious and take great care to correct any mistakes in a timely fashion.

IATA says it doesn’t verify test results or vaccination status but acts as the conduit for registered labs to securely send those details to travelers whose identity the app can match to the person who took the test or vaccination. The app scans a traveler’s face using the phone camera and matches it to passport biometric details, and there are checks to prevent someone else from using their identity.

Isn’t amazing-this is almost an EXACT description of the Universal Data Base that we were told just a few years earlier wasn’t possible or legal. And as a few short months later a perfectly logical REASON exists that is going to make this happen.

Holding the economy hostage until the private sector solves a political problem is peek fascism by every definition I can find, as politicians insist upon the private sector to not only come up with a solution but become the enforcers to “reopen” their industry.

And the new rules back up exactly the “boots upon our necks” regulations that they were unsuccessful in getting pushed through previously.

The countries and federations moving toward vaccine passports might very well be in a position to do it. But what about the countries who lack the infrastructure, are economically unable to enforce such laws, or lack the luxury of being so particular about those who come to their countries to spend money?

It seems reasonable that they might not pursue these measures or interventions-leaving a perfect workaround to anyone who does not wish to follow these Draconian restrictions.

There’s no unified front, no universal database, no universal app, and no universal buy-in. It’s inconvenient for all users from care providers, to travelers, to businesses. It’s difficult to see how all this impracticality is overcome.

Predictions: whatever solution(s) that are presented are going to represent a further loss of liberty and privacy, and take us one more jolly skipping-step toward the New World Order and tyranny that we seem to screaming toward.