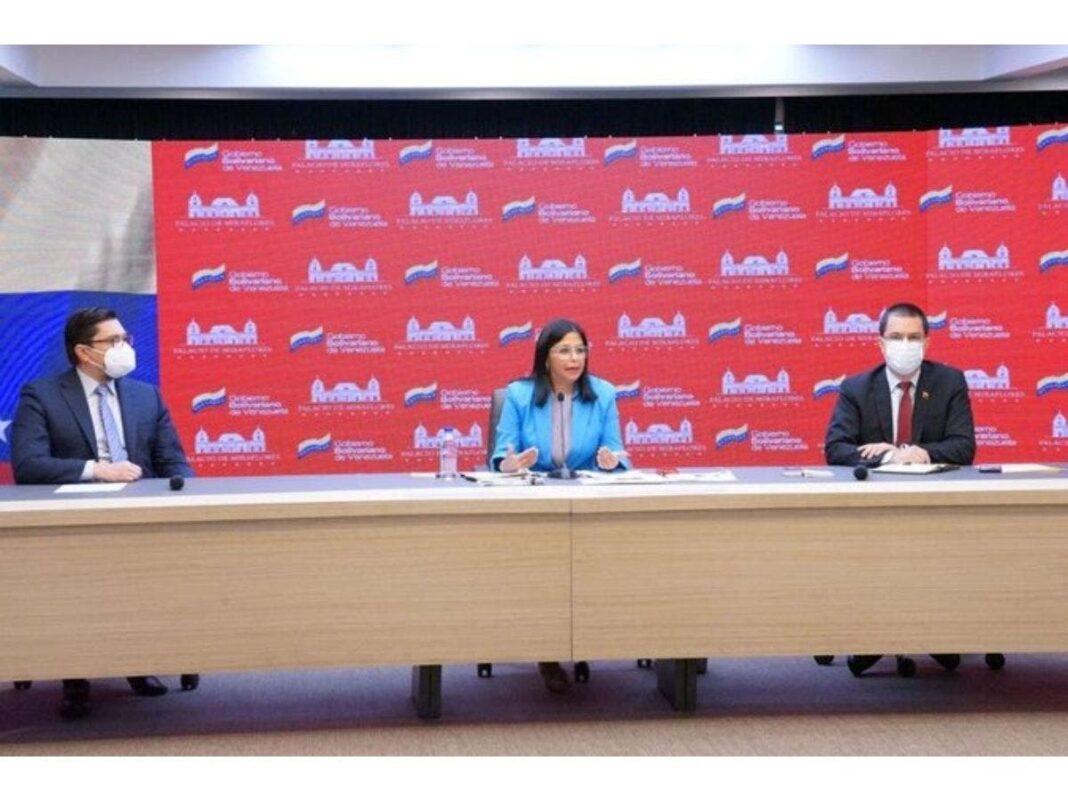 The Government of Venezuela presented this Wednesday a report on the stripping of the country’s assets abroad, a situation that has hindered the acquisition of vaccines against COVID-19 due to machinations carried out by Juan Guaidó.

Venezuela’s executive vice president, Delcy Rodríguez, indicated that the blockade of more than $7 billion of Venezuelan liquid assets abroad driven by Juan Guaidó prevents the purchase of vaccines against COVID-19.

Rodriguez affirmed that the Government of President Nicolás Maduro had made intense efforts to release financial resources that are withheld by international banking entities.

In a press conference with Foreign Minister Jorge Arreaza and Attorney General Reinaldo Muñoz, Rodriguez indicated that Venezuela initiated a lawsuit against the Bank of England to release Venezuela’s funds and face this battle against COVID-19.

Rodriguez detailed that since January 2019, the extremist right-wing operating under a criminal structure, whose ringleader is former Deputy Juan Guaidó, has tried to enrich itself and finance conspiratorial actions that include destabilization plans, frustrated assassination attempts, mercenary actions for the invasion of Venezuela, such as Operation Gideon, and plundering of the resources and patrimony of Venezuela, ordered by the White House.

She pointed out that the Central Bank of Venezuela (BCV) and Petróleos de Venezuela (PDVSA) have been victims of a criminal plundering that has been denounced on several occasions and that since March 2020, when the first cases of the pandemic were registered, the Venezuelan Government and institutions have sought alternatives to release the blocked funds, but have been denied.

“Venezuela is part of the Covax mechanism, but we cannot access those blocked resources,” Rodriguez maintained.

“Vice President Delcy Rodríguez requests the Chief Prosecutor of the Public Ministry to open an investigation against former Deputy Juan Guaidó and his team for sabotaging the Venezuelan Government’s efforts to acquire vaccines and medicines.”

“We have requested the Public Prosecutor’s Office to carry out thorough investigations to determine the responsibility of Juan Guaidó for impeding the right to health and life of the Venezuelan people,” she said.

She noted that Venezuela’s resources were transferred to the US Federal Reserve by order of Juan Guaidó; from there, “this gentleman disposed of assets for the invasion of Venezuela. To hand over the country to foreign powers,” she said.

Rodriguez recalled that the dispossession of resources began when in March 2019, funds held by the Central Bank of Venezuela in the City Bank were transferred. Then they were frozen from this BCV account and then directed to the US Federal Reserve.

Rodriguez further clarified that “on March 15, in the Foreign Minister company, we met with the PAHO representative and informed the decision not to receive the AstraZeneca vaccine. Venezuela will choose the permitted vaccine to be applied to the Venezuelan people,” she stated.

Through the National Assembly, a technical round table was set up with the participation of PAHO, Unicef, the opposition, academics, and scientists to accompany the efforts of the Bolivarian Government to release the resources and attend to the need to immunize the Venezuelan people,” she said.