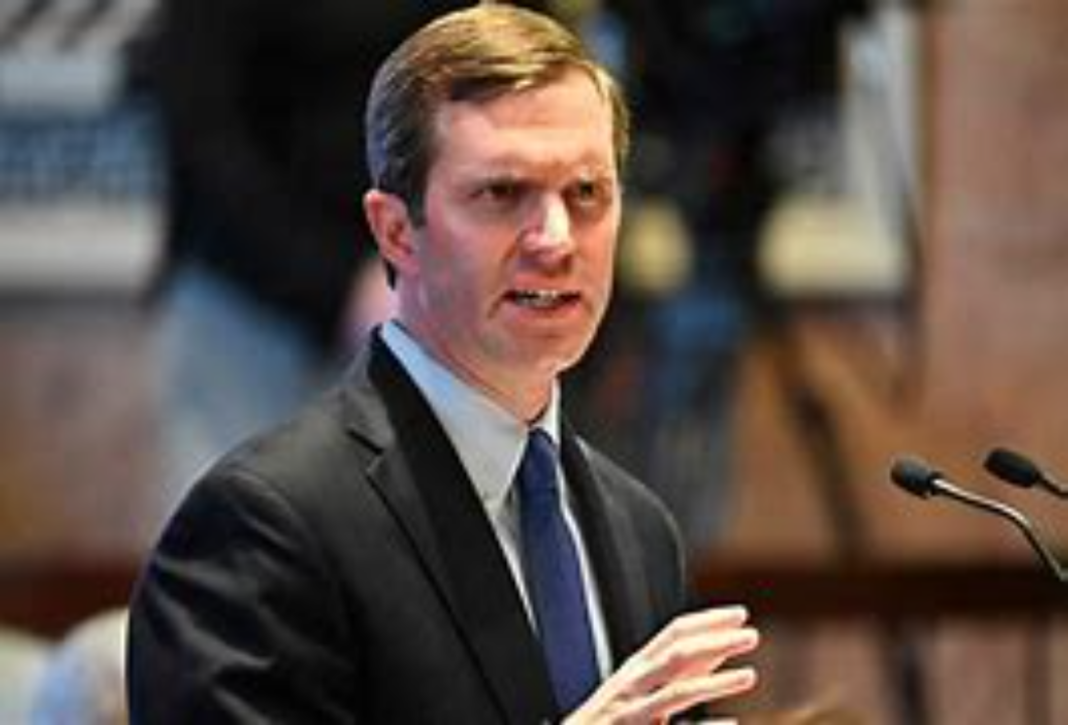 A couple of days ago, Joe Biden made his way to Ohio, and on the way, he stopped in Kentucky to speak with Democrat Governor Andy Beshear.

WLKY reported that Joe Biden made his way to Ohio this week to promote his Build Back Better agenda, but before he did that, he made a brief stop in the Bluegrass State, where he was welcomed by Gov. Andy Beshear and his family.

Photos and video show the first family of Kentucky chatting it up with the Commander-in-Chief Wednesday at the Cincinnati/Northern Kentucky International Airport. Beshear was accompanied by first lady Britainy Beshear and their two children.

Beshear greeted Biden as soon as the president walked down Air Force One. While there is no sound of them talking on the tarmac, video shows the group talking, smiling and laughing next to one of the president’s vehicles.

One video clip from that greeting has the internet buzzing – and not in a “good way.”

The clip that has everyone talking, shows Joe’s interaction with Beshear’s son. You can see him awkwardly “holding” the young boy’s hand, and then moments later slips him something.

I don’t know what Joe handed the young kid. If you ask me, it is likely something very innocent, like maybe a presidential coin in a cloth bag or something like that, and perhaps Joe is just trying to be “grandfatherly” or something.  I get that, but there’s a problem here.

Joe Biden has a long and sorted history (on video) of getting way too up-close-and-personal with women and kids – as a matter of fact, several women have actually come forward and complained about him “sniffing” and “nuzzling” them.

It’s also rather creepy for those of us watching these clips. Yet, no matter how often Joe is told that his “overly close/personal” actions make people feel uncomfortable, he simply won’t stop doing it…So, obviously, it attracts a great deal of attention and suspicion when it happens again and again, even if there’s a perfectly simple and innocent explanation.

What did he just give the kid? pic.twitter.com/8hRYs1gZ0t

Here are some of the comments from people online:

“It looks like he handed him a COVID mask?”

“That was not his mask that he gave him. If you watch carefully, Biden switched his mask to his right hand before holding hands with the kid. The kid did not act surprised, and instead very stealthily pocketed whatever it was Biden gave him. The dad saw the whole thing.”

“I’ve never known any NORMAL grown man to touch other peoples children he’s never met before on a regular basis.”

“I just don’t understand why he can’t stop being this close and creepy with other people’s kids?”

“Don’t they have coins buttons pins and whatnot they hand out to kids? I mean Im in no way a fan of Biden, but that’s likely what it was”

“I’d say it was dementia making him act this way, but there are videos going back decades that show this same pattern of behavior”

“It could have been a challenge coin. Presidents do this and they can be in a fancy cloth bag. Just trying to be honest about it. Joe is still a creep though.”

“This could have been something totally innocent, but he’s such a creep, that it looks awful.”

“That’s Andy beshear and his family. The liberal governor of ky. Andy let creepy joe feel and smell his kids right in front of him”

“why is that poor kid the only one wearing a mask?”

“That is disgusting, this guy gets creepier by the day!”

Again, from what I can gather, it’s less about what Joe handed the child and more about Joe’s seemingly “creepy” way he invades personal space –  especially when it comes to kids.

And I get that – because as a mother, I would never let any man – I don’t care who he is – to nuzzle up to my young daughter as Joe did to Andy Beshear’s daughter.

It’s just not appropriate, regardless of Joe’s “innocent” intentions.

And it’s really mind-boggling that Joe and his Handlers don’t realize that this is a “creepy look” for an elderly man to have nowadays.

While Joe’s “grandpa” vibe may have gone over big back in his day, that’s not how it looks today, and it’s disturbing that he can’t see and respect that.