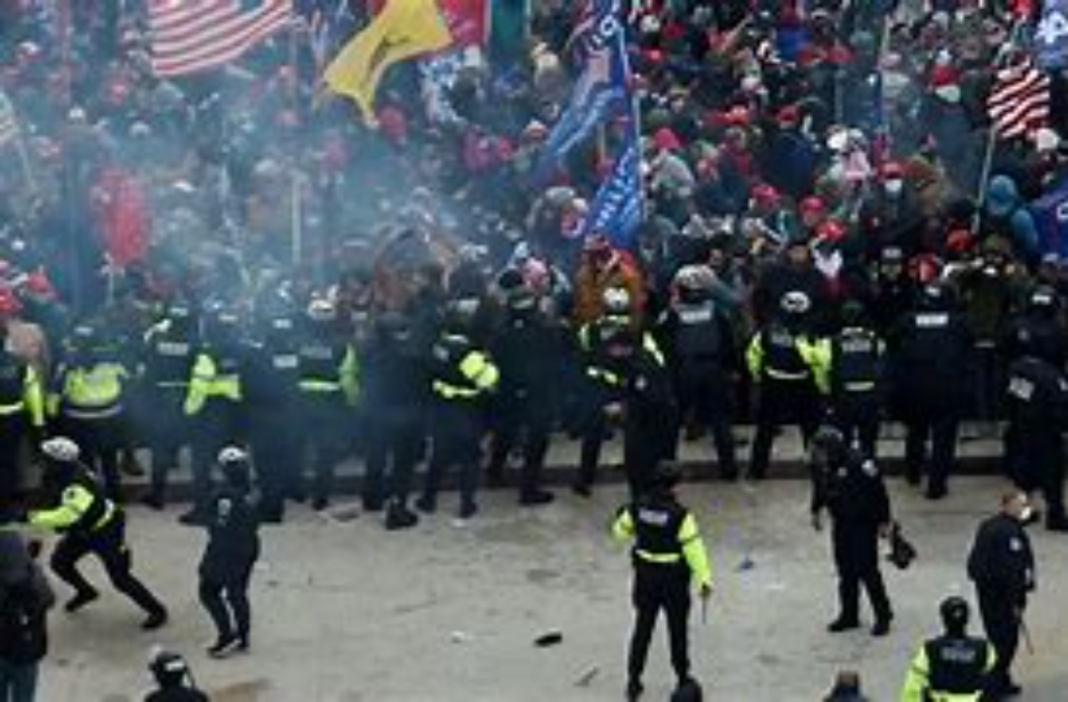 “Set-up” is an odd word in context considering that the rally’s been organized by a Trump 2016 campaign staffer who now runs an “America First nonprofit dedicated to standing up for patriotic Americans who have been forgotten by our government.” It’s not a false-flag operation designed to make MAGA look bad.

But attendees may very well make themselves look bad, and by extension Trump. Which is what he means by “set-up” in this interview, I take it. He means it’s a no-win situation for him and the GOP.

The most interesting angle about the rally, in fact, is how little support it’s getting from the wider Republican Party. From Trump to Kevin McCarthy to MAGA heroes like Marjorie Taylor Greene, no one but no one wants to touch a protest held outside the Capitol in support of some of the January 6 rioters. I’m guessing the word came down from TrumpWorld that all GOP officials should steer clear unless they want to earn a grudge from you-know-who.

“There’s a discontent with everything having to do with politics,” Trump said about the general political situation in the country. “People are so disgusted with the way people are being treated from the Jan. 6 situation. It’s a combination of that compared to how Antifa and BLM were treated. When you compare the treatment, it is so unjust, it is so unfair. It’s disgraceful.”

Trump also characterized the planned Sept. 18 rally at the U.S. Capitol as a “setup” meant to denigrate Republican voters regardless of what transpires.

By “harassed,” I think he means street fighting. Which is a real concern:

Capitol Police chief Manger on concerns about violence at the “Justice for J6” rally:

“What we’re concerned about I think more than anything is the possibility of counter-demonstrators and making it to this… and there being [fighting] between those two groups.” pic.twitter.com/ajqB6k9ab9

The chief’s right, Trump did put out a pity-party statement for the rioters, who have finally completed their MAGA narrative journey. On January 6, when the country was shocked by the scene at the Capitol, righty populists accused them of being Antifa, BLM, or FBI agents provocateur tasked with making the president look bad. Eight months later, with the shock having worn off, they’re now recognized and even embraced by some on the right for what they actually are, hardcore Trumpers. “Our hearts and minds are with the people being persecuted so unfairly relating to the January 6th protest concerning the Rigged Presidential Election,” Trump said in yesterday’s statement. Which raises the question: Why does he want Republicans to stay away from tomorrow’s rally?

It could be that he’s reluctantly going along with a request from party guys like McCarthy and Lindsey Graham who understand that Democrats want to run against Trump and insurrectionism next fall. If there’s more violence tomorrow — and the Capitol Police are planning for it, just in case — it’ll make it that much easier for them. But Trump might not need McCarthy et al. to steer him in the right direction on this subject. If he’s serious about 2024, he must grasp by now that the post-election period has made him look like a loose cannon to the swing voters he’ll need to win back to become president again. Endorsing a rally in support of the jailed rioters makes that harder.

Of course, if Trump was all about rehabbing his image, he wouldn’t still be issuing statements every other day reiterating his belief that the election was stolen. But maybe this is the best he can do. He can’t let go of his belief that he was cheated but he can at least let go (for now?) of mass gatherings with a possibility of violence committed in his name. And he can let it be known to his courtiers that he doesn’t want anyone in a position of power to attend the rally and egg on the demonstrators. “Not a single member of Congress has confirmed his or her attendance,” the Times reported a few days ago. The most prominent speaker booked as of Wednesday was the guy who’s primarying pro-impeachment Republican Jaime Herrera Beutler. Fringe righties are also urging people not to go, with Roger Stone recently telling Russian TV (of course) that “It’s a set-up… The people who will be there will all be working for the government.”

That message has penetrated online:

Across rightwing social media platforms, “most people who are talking about the event in any capacity are telling people to steer clear of DC,” Cassie Miller, a senior research analyst at the Southern Poverty Law Center, said. “Any extremist group that’s talking about it is warning people against attending.”

The common narrative in rightwing forums is that the rally is “a trap that’s been set by federal authorities” that will leave participants vulnerable to “surveillance and arrest”, Miller said.

While intelligence officials reportedly warned in early September that the Proud Boys and the Oath Keepers were planning to attend the rally, both groups, whose members are facing some of the most serious charges in the 6 January attack, have since distanced themselves from the event. A Proud Boys social media channel posted “Sounds like bait” and wrote “We aren’t going and you shouldn’t either”. In an interview on his way to jail, the group’s chairman, Enrique Tarrio, said: “The Proud Boys will not be there,” WUSA 9 reported.

I can’t tell if the paranoia about federal infiltration is just a smokescreen fabricated by top MAGA people to discourage outfits like the Proud Boys from attending or if the reports of insurrectionists rolling over on allies while in federal custody has spooked potential rallygoers into believing everyone there will be an informant.

Even Matt Braynard, the rally’s organizer, is eager to appease Trump by keeping his fingerprints off the event:

We request that anybody attending our events not wear any clothing or have signs supportive of either President Trump or Biden.

Anyone not honoring this request will be assumed to be an infiltrator and we will take your picture, find out who you are, and make you famous.

I’m surprised he went ahead with the rally to begin with knowing how displeased the former president is about it. Maybe he’s calculating that so long as he continues to be obsequious towards Trump, he’s free to go off in his own direction and build a parallel but independent populist base. Call it the “Lin Wood model” of activism. There are less lucrative ways to make a living than to be known to the populist right as the guy who goes around organizing rallies in support of the January 6 clowns.

Cops are currently expecting a crowd of less than a thousand people. We’ll see. I’ll leave you with one more tweet from Braynard as further evidence of how chilly the establishment right is to tomorrow’s event. Evidently the warning to stay away made it over to Fox News too.

Networks that scheduled interviews me about the #JusticeforJ6 rally for non-violent Cap6 political prisoners:

Who is missing? Hmmm.

Are All Men Created Equal?