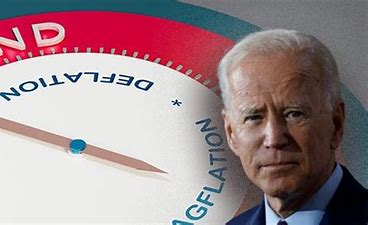 The Bureau of Economic Analysis just released its estimate for GDP growth in the first quarter of 2022. Real GDP declined at an annual rate of 1.4%. Since inflation is running at an 8.5% annual rate, the US has entered a period of stagflation. This is a condition not seen since the late 1970s. Is Biden the new Jimmy Carter?

Higher Prices Across the Board

It also means businesses must pay more for energy to produce their output. Retailers also must pay more, since nearly all of their products are shipped via trucks that have incurred higher gasoline costs.

Additionally, to prevent COVID-19 from sending the U.S. economy into a recession, the Biden administration also gave free money to unemployed Americans. That meant many did not return to work, even when their employers called them back. That contributed to a labor shortage, which drove up wages, further increasing costs for businesses.

The shockingly irresponsible monetary policy of the Federal Reserve has also contributed significantly to the inflation problem now facing the United States. Instead of tightening the money supply and raising interest rates when there were clear signs of inflation in the first quarter of 2021, the Fed continued its $120 billion monthly bond buying program.

Even more shockingly, the Fed continued to keep interest rates near zero until just last month, when it finally raised the Fed funds target rate, near zero, by 25 basis points.

Last year, U.S. GDP (gross domestic product) economic growth was 5.7%. In the first half of last year, growth was 6.5%. Clearly, given indications early last year, the Fed should have reduced the bond buying program and raised interest rates.

Had that happened, inflation would be about half of what it is today.

Now the administration and the Fed have a nearly impossible situation. If the Fed becomes very aggressive with interest rate increases, which is likely, that will cause GDP growth to fall even further. If it increases the money supply, that will create more excess demand and pour added fuel on the inflation fire.

This dilemma has not been seen in the U.S. since the late 1970s and early 1980s. The Fed must choose which problem to focus its attention on. In 1981, inflation hit double digits, so the Fed was forced to concentrate on that problem first.

The Federal Reserve tightened the money supply and raised interest rates to double-digit levels. That did bring inflation down, but it caused a very severe recession.

To fix the stagflation problem today and minimize the pain to Americans, Biden will have to reverse the policies that caused the problem.

Biden must also allow drilling on Federal land and allow drilling in ANWR, off of the Alaskan coast. He must also remove counterproductive regulations that slow the permitting process and stop discouraging banks from lending to the oil industry.

He must also stop paying people not to work.

The Fed will have to raise interest rates significantly and aggressively. That means a 50 basis point rate increase next month and interest rate increases at least four or five times more before the end of the year. Admittedly, that will slow economic growth.

It is evident now that Biden’s $1.9 trillion American Rescue Plan and his $1.2 trillion infrastructure bill overstimulated the economy and contributed to the inflation problem. At this point, President Biden should move to reduce government spending. Instead, he wants to increase it.

Inflation is a nasty problem that hurts lower-income and fixed-income people the most. The fiscal and monetary policy blunders in 2021 have led to the stagflation today. Unfortunately, things will get much worse before they get better.

Did someone say let’s bring back the economic policies of the prior administration of President Donald J. Trump?

In 2020, inflation was 1.8%, unemployment was 3.5%, and economic growth was increasing. To paraphrase a DJT catchphrase, let’s make America solvent again.

The “danger” of allowing Giuliani to be disbarred “without a hearing.”