Roce Today – Politics, Opinions, Gun Rights,Pro-Life and Border Wall
Home Politics What to expect when you’re inoculating (i.e. what you can—and can’t—do after... 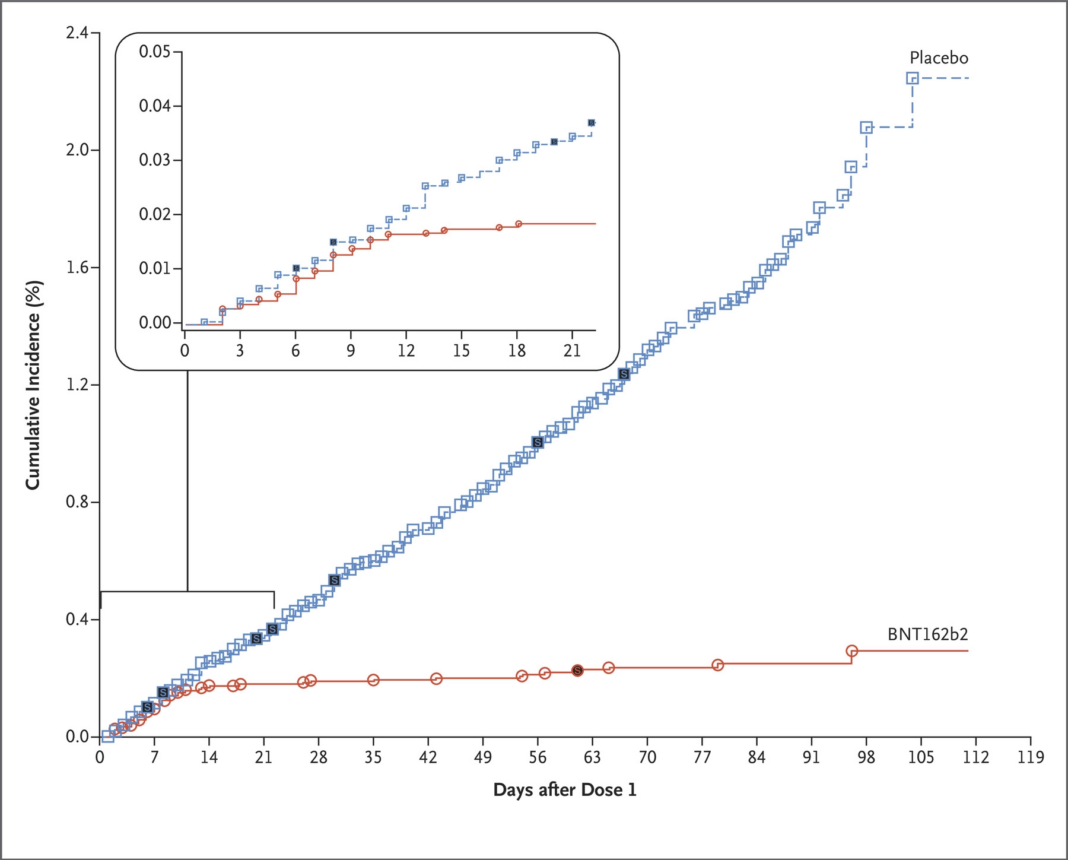 As was made clear during each of the hearings before the FDA’s panel of outside experts, it takes time for each of the vaccines to really start to work. For the Pfizer and Moderna vaccines, there seemed to be a sharp distinction between the group of patients who received the vaccine during trial, and the placebo group, starting around 12-14 days after the first injection. Protection then was still far from perfect, but the departure from the people who didn’t get the vaccine is pretty distinct.

Here’s what that looks like in Pfizer’s phase 3 trial data.

However, there’s one thing that’s really vital about this chart that’s easy to overlook. Get out a magnifying glass, and focus in on the first 10 days. What can be seen in both groups is that the rate of infections immediately after getting that first jab is quite high. In fact, if you hold a straight edge up to this section of the chart, you can see that the rate of infection for both patients getting a vaccine and those getting a placebo is higher in this first week than it is for the placebo group throughout the rest of the study.

That’s not because getting a needle to the arm makes you more susceptible to COVID-19. It’s because getting a needle in the arm makes some people feel less susceptible to the virus, even when they’ve been told they’re not. And having just escorted my 86-year-old mom through her first shot with the Pfizer/ BioNTech vaccine, I can tell you that no one stepped up to give her any lecture about the vaccine not being an instant, 100% effective shield. Vaccine providers are getting vaccine into arms as fast as possible. They just expect you to know this stuff.

One thing that’s immediately apparent about Johnson & Johnson’s single-dose vaccine is that the “peel away” point is less dramatic. The placebo group and vaccine groups diverge at around the same point, just after two weeks, but they trend much more similarly over the next two weeks. When Johnson & Johnson sets the efficacy of their vaccine at 72%, that number comes from looking at a point about 28 days after the single vaccination—or at about the same point folks getting the Moderna vaccine are getting their second shot. But as the chart makes clear, things get better after that. In fact, the uptick at the end of the line is actually due to modeling. In terms of the real data, there are no more moderate/severe cases of COVID-19 among people receiving the Johnson & Johnson vaccine after that last lonely dot around day 48. And that’s despite the fact that parts of this trial happened in South Africa, where one of the more contagious and evasive variants made up over half the cases.

What does all this tell you? When a vaccine becomes available to you, get it. They’re all good. There are arguments that might be made for one to be better than the others in some specific fashion, but if you’re not the person in charge of maintaining the freezer, and you don’t mind making a trip for a second shot, it doesn’t matter. Take a vaccine when it’s offered.

And then hunker down for the next month. Because you’re not done cooking.

For those who are fully vaccinated

At the end of that month, everyone will have had their second shot, or had long enough for the single shot vaccine to do most of what it’s going to do. Immune response should be high, antibodies should be raging, and look out coronavirus! What then?

Indications are that the CDC guidelines, which were stalled under the … what was that guy’s name again? … administration, have now been drafted and sent to the White House for approval. What’s in them isn’t clear, but it surely contains some of these points:

When the CDC gets some official guidelines out, expect an update. Because they’ll likely have many more suggestions and give a lot more specifics on what’s in and out for the immunologically empowered set. And somewhere around the time we’re shooting fireworks in July, all of these rules may get wadded up and tossed away. We’ll see.