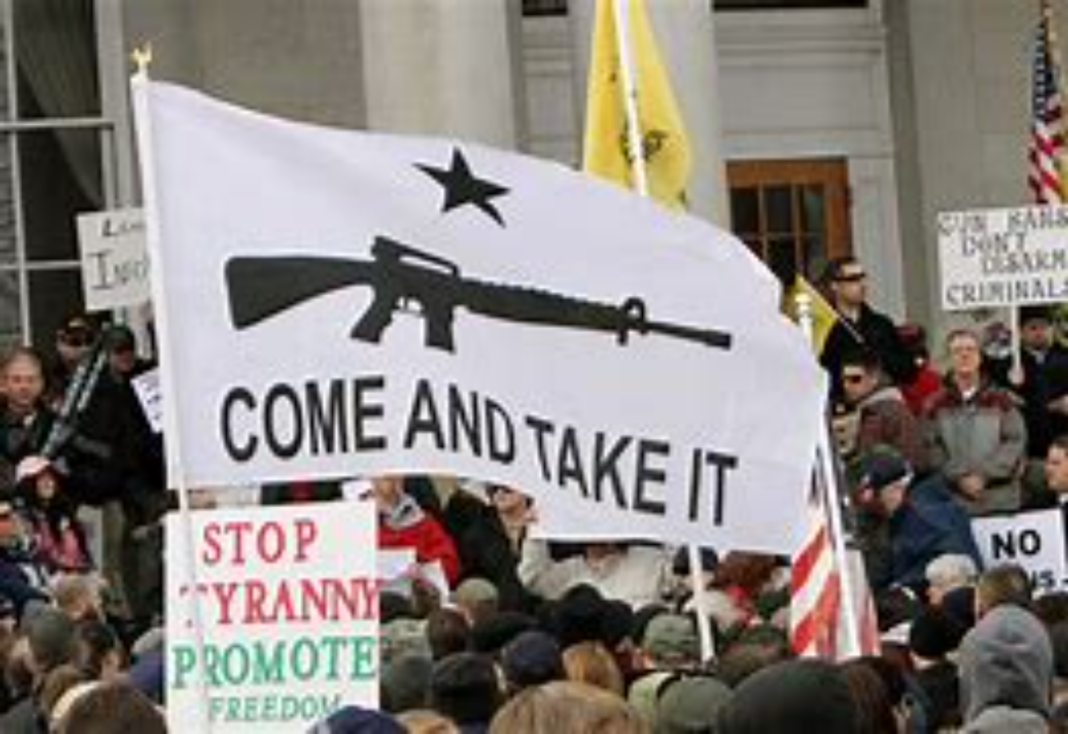 “This isn’t the first time Biden’s warned the gov’t would use every weapon in its arsenal against Americans,” quipped Tom Elliott, remembering how Biden said something like this at a rally early last year.

Maybe the Second Amendment should be extended to include F-15s.

Seriously, though, this dumb gun-control talking point is deathless even though it’s never been clearer how untrue it is. Watch, then read on.

President Biden says there have always been ways to “rationally limit” owning weapons since the creation of the Second Amendment: “If you think you need to have weapons to take on the government, you need F-15s and maybe some nuclear weapons.” https://t.co/AfTvxIBkOu pic.twitter.com/Dt6qgsKffU

There are many lessons to be learned from America’s adventure in Afghanistan but an easy one is that a crudely equipped force using guerrilla tactics is fully capable of prevailing over one with superior firepower. That lesson should have been clear already from Vietnam but our experience fighting jihadis in the Middle East leaves no doubt. The Taliban is reconquering its home country literally as I type this, in fact:

The number of videos that I am seeing of Afghan troops surrendering, conquered bases, and seized military hardware (including Humvees and artillery pieces) is staggering. The Afghan government and security forces are at risk of facing a battlefield rout.

They’re advancing so quickly in the wake of Biden announcing a U.S. withdrawal that American intelligence is revising its timeline for how soon the Afghan government might fall:

The U.S. intelligence community concluded last week that the government of Afghanistan could collapse as soon as six months after the American military withdrawal from the country is completed, according to officials with knowledge of the new assessment.

Overall, the Taliban’s lightning offensive in northern Afghanistan resulted in the fall of dozens of districts over the past week, putting much of the countryside under insurgent control. Local politicians and tribal elders negotiated a series of surrender agreements with government forces. Often unpaid for months, these troops left convoys of armored vehicles and stockpiles of weaponry, including artillery pieces, mortars and heavy machine guns, in exchange for Taliban guarantees of safe passage.

The F-15s that we did use and the nukes that we didn’t weren’t enough to prevent that. You can’t outgun the world’s greatest military, but if you’re willing to fight long enough and let the casualties pile up, you can certainly outlast it.

Surely a man of Biden’s age and experience understands by now that a Democratic president talking ominously about guns is destined to drive demand for guns even higher among the public. So why would he do it if he wants to get guns off the street? Ah — it’s because he had a bit of news tucked away in this afternoon’s speech on crime that he knew his base won’t be happy about. He must have figured that a little tough talk about firearms would soothe them, easing the blow he was about to deliver. He’s … re-funding the police:

“We’re now providing more guidance on how they can use the $350 billion… to help reduce crime and address the root causes,” Biden said. “For example, cities experiencing an increase in gun violence are able to use American Rescue Plan dollars to hire police officers needed for community policing and to pay their overtime.”

Biden said that he believed some cities cut funding for police due to pandemic-related budget woes. He didn’t mention a push by fellow Democrats to defund the police following the May 2020 murder of George Floyd by Minneapolis cop Derek Chauvin.

Biden also said that violence “spiked since the start of the pandemic over a year ago,” adopting a largely Democratic argument that crime is increasing because of COVID-19 and not because of a policing pullback amid anti-police brutality protests and riots.

It’s probably not a coincidence that he delivered those remarks the day after ex-cop Eric Adams finished on top in the first round of the NYC mayoral primary by promising a crackdown on crime. Adams’s strongest constituency: Black voters. And it’s not just NYC where violent crime has become a top concern, needless to say. Biden’s straining to avoid a “Jimmy Carter 2.0” narrative in which his presidency is defined by the return of 70s specters like inflation and lawlessness, knowing what a bloodbath the midterms could be if it is. There’s only so much he can do about crime from the Oval Office but one thing he can do is to distance the party from progressive calls to defund the police. Dems are almost certainly going to lose the midterms regardless but if Biden can convince swing voters that he’s at least trying to address their biggest policy anxieties he might be able to hold down the losses.