Roce Today – Politics, Opinions, Gun Rights,Pro-Life and Border Wall
Home Politics Why can’t you see that we were safer under President Trump? 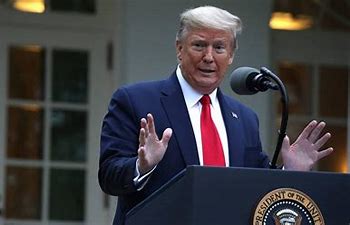 It’s going to be so amazing when Bolton walks out to a standing ovation at the 2024 Democratic convention to endorse Joe Biden over Trump.

Don’t laugh. If Dick Cheney’s daughter can become a folk hero among liberals for trying to defeat the Great MAGA King, the Iron ‘Stache can too.

This was a fun exchange last night on Newsmax, in which Bolton didn’t even try to conceal his contempt for Bolling’s Trump adulation.

When John Bolton says on Newsmax that we are safer under Biden then we would have been under Trump, the host loses his mind and they have an epic battle. I know people hate Bolton, but this is fantastic – he debunks every fake narrative they created about his foreign policy. pic.twitter.com/GdSr6pcfdv

Bolton is right on the basics. The February 29, 2020 agreement between the U.S. and the Taliban called for total withdrawal of American forces by May 1, 2021 provided that the Taliban met its own commitments under the deal.

There were in fact 2,500 U.S. troops still left in the country early in Biden’s term but the deadline agreed to by Trump required them to be withdrawn by May 1, leaving the new president with a dilemma. He could either honor the agreement and keep his pledge to get America out of Afghanistan after 20 years or he could tear it up and face a hot war with the Taliban, shattering that pledge. He decided to follow through with withdrawal.

Would Trump have done the same if he’d won a second term? It’s an interesting question.

I suspect he would have. Trump was so keen to get the U.S. out of the country, remember, that he signed a “secret” memo on November 11, 2020 ordering full withdrawal from Afghanistan by January 15, 2021. The memo blindsided members of his national security team like Mark Milley and Robert O’Brien. A withdrawal that speedy would have caught American troops in the field, let alone the Afghan government, completely by surprise and set off chaotic operations to shore up the Afghan army and evacuate ASAP. O’Brien ultimately prevailed upon Trump to “nullify” the memo but as a statement of his preferences it was crystal clear. He was very eager to get out, in keeping with his “America First” isolationist bent.

I think the disconnect between Bolling and Bolton is that Bolling is speaking tactically about the withdrawal and Bolton is speaking strategically. Bolling insists that Trump’s withdrawal wouldn’t have led to 13 American troops being blown up at the Kabul airport, which may be so. It’s hard to imagine how Team Trump could have done a worse job than Team Biden did in underestimating the speed of the Taliban’s advance across the country. Bolton’s point, though, is that the fact of withdrawal itself was a show of provocative weakness that encouraged Russian and Chinese expansionism. Even if the withdrawal had been executed perfectly, the lesson from it for enemy powers was that America was done for the time being with thankless far-flung foreign interventions.

And as Bolton says, it was Trump who got the ball rolling on that withdrawal with the February 2020 agreement. To hawks, that was the original sin here, entirely apart from Biden’s half-assed fulfillment of Trump’s promise.

In fact, if you subscribe to the view that isolationism is provocative weakness, a second Trump term almost certainly would have been weaker than what we’ve gotten from Biden.

According to the book, Mr Esper confided in colleagues that he was rooting for Joe Biden to win the election because he believed he cared about national security.

“Esper couldn’t say the same about Trump. In fact, Trump had privately indicated that he would seek to withdraw from Nato and to blow up the US alliance with South Korea, should he win reelection. When those alliances had come up in meetings with Esper and other top aides, some advisers warned Trump that shredding them before the election would be politically dangerous.

Bolton himself has said that he expects Trump would have pulled the plug on America’s foreign partnerships. “In a second Trump term, I think he may well have withdrawn from NATO,” he said earlier this year. “And I think [Russian President Vladimir] Putin was waiting for that.” Zelensky will never admit it publicly but I’m sure he’s tremendously relieved to have had an internationalist like Biden steering NATO during Russia’s invasion than an America-Firster like Trump. For a best guess at how Trump would have felt about the war in Ukraine, have a look at how some MAGA all-stars have opined about it this year.

It’s possible that Trump’s hawkish natsec deputies would have convinced him to aid Ukraine, as they did during his first term. But it’s more likely that Trump in his second term would have gone with his gut, no longer needing to care about public opinion as a term-limited president. If he truly was serious about withdrawing from NATO in his second term, as Mark Esper alleged, it’d have been passing strange for him to turn around and arm Ukraine to the teeth at the same time.

Bolling should have stuck to stronger material about Team Trump’s efforts to make America safer, like advancing peace in the Middle East by facilitating the Abraham Accords. Oh well.