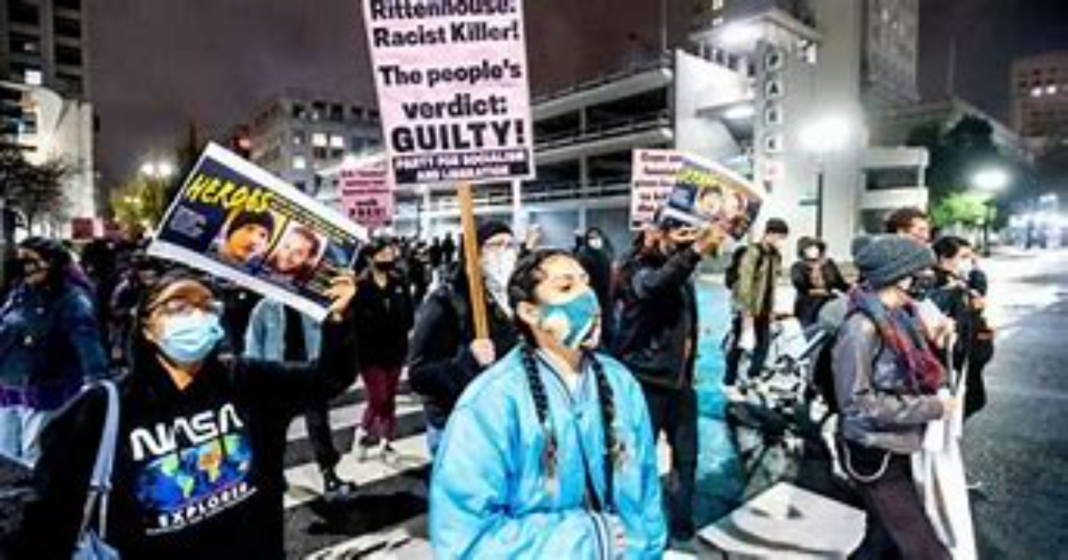 Well, at time of writing, there is no riot yet in Kenosha.

However, the blacks are rioting in New York City, and calling for the murder of cops – in response to Kyle Rittenhouse being declared not guilty.

#BlackLivesMatter Activists take to the streets of Brooklyn NY in response of the #KyleRittenhouseTrial and chant ” EVERY CITY EVERY TOWN BURN THE PRECINCT TO THE GROUND “#NYPD #NYC pic.twitter.com/WyyUJcjR0B

#BlackLivesMatter shut down down Manhattan Bridge and chant ” IF WE DON’T GET IT BURN IT DOWN ” in response of the #KyleRittennhouse case pic.twitter.com/lJRQnPpEHN

#BlackLivesMatter take over Manhattan Streets and chant ” IF WE DON’T GET IT BURN IT DOWN ” IN response of the #KyleRittenhouse case. They demand justice #NoJusticeNoPeace #NYC pic.twitter.com/yCgpFm2HJH

It is just 100% manufactured, and no place has that ever been more obvious than in this place.

Kyle killed two “white” people, and shot a third. Actually, at least two of them were Jews.

So then the Jews just go out and tell these blacks that he killed black people.

Literally – these people are out there saying he killed three blacks.

The largest media outlets in Brazil this week had to retract their articles on the Rittenhouse case because they claimed it was a case of a white youth having shot and killed two black men. They got this from the US media, which deliberately cultivated this false narrative. https://t.co/UXrzUaZ7Wg

Anyone who gets their news from CNN, MSNBC, NYT, or online digital media outlets believed this for most of the last 18 months:https://t.co/yO4kpLGeKZ

The media categorized it as a “racial injustice” story.

Adam this is so incredibly stupid. The media unanimously portrayed this as a racial justice story. The AP filed the story under the “Racial Injustice” news category. Yeah I really wonder why people thought the case involved a racial conflict. pic.twitter.com/6FI7fd4j2n

They know that blacks are too stupid to know what is even going on. They purposefully confused these blacks, and incited them to hatred.

Glenn Greenwald showed that all of the big news outlets in Brazil were reporting that the people Kyle shot were black.

Just confirmed that yet another major Brazilian news outlet — @JornalOGlobo — announced in its headline today that the person Rittenhouse killed was a black man.

What do you think explains that so many major media outlets around the world were deceived into believing this? pic.twitter.com/I2Vj5K048x

The Dutch as well.

The Jews who control the media understand that they can shape a narrative, cause people to believe something different than what happened, without actually saying it outright. They did say over and over that Kyle is a “white supremacist” who “murdered innocent people,” but they never actually said he murdered black people.

But the general idea that the overwhelming majority of blacks hold, as well as huge numbers of white liberals and women, is that Kyle went to a black protest and then just started opening fire on a crowd.

The courts let him go because they are run by white supremacists who hate black people.

It’s just all so utterly nonsensical – the exact opposite is true. Whites are the most oppressed class, and they almost put this white kid in prison for defending himself after he was attacked by violent criminals, including a gay who sodomized five boys aged 9 to 11.

The other Jew was pulling a gun on him, and should have been charged for attempted murder. Instead, he’s been presented as a victim, and praised as a hero.

The facts just simply do not matter at all, given the clamp-like control that Jews have over the media.

You got to be Honesty to get what you want