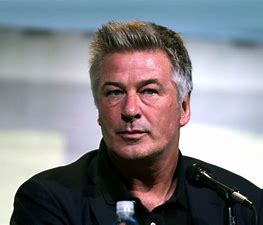 A new legal challenge is coming at Alec Baldwin. We’ve read a lot of stories about his potential legal problems over the fatal shooting of cinematographer Halyna Hutchins. Now the widow and sisters of a fallen Marine are filing a defamation lawsuit against him.

You probably remember the story of Lance Cpl. Rylee McCollum. He was one of thirteen service members killed at the Abbey Gate at Hamid Karzai International Airport during Biden’s chaotic evacuation of Afghanistan. He was a young Marine who left behind his pregnant wife and a devoted family, including two sisters. A month after McCollum’s death, his wife Jiennah gave birth to their baby girl, Levi Rylee Rose McCollum. GoFundMe pages were started for families of the fallen, including McCollum. By the time the baby was born, over $800,000 had been raised for Jiennah. All of the deaths of the 13 brave service members were heartbreaking and McCollum’s was particularly hard. The couple was so young, the Marine was only 20 years old, and the baby was due soon.

In August when the terrorist attack happened at the Abbey Gate during Biden’s botched evacuation at the airport in Kabul, the fundraising began for the families. Alec Baldwin contacted McCollum’s older sister, Roice McCollum. He sent her a check for $5,000 for Jiennah McCollum and her child. The check was “a tribute to a fallen soldier,” Baldwin said. So far, so good. But, then the story gets weird. Roice posted a picture on her Instagram account that led to Baldwin mounting his high horse and incorrectly calling Roice a January 6 rioter, labeling her an insurrectionist on his own Instagram account. He called her out with false accusations and she immediately began receiving hostile, aggressive and hateful messages from Baldwin’s followers. Baldwin has 2.4 million followers on Instagram.

A lawsuit has been filed against Baldwin for his behavior toward the family.

The court documents state that on Jan. 3, Roice posted a photo on her Instagram page that she took on Jan. 6, 2021, showing a crowd of demonstrators at the Washington Monument. Roice posted the photo, the lawsuit said, in anticipation of the 1-year anniversary of the invasion of the U.S. Capitol.

While Roice attended a demonstration in Washington, D.C., in support of former President Donald Trump on Jan. 6, 2021, she was not involved in the riot and while she was later interviewed by the FBI, she was never accused of or charged with a crime.

Baldwin commented on Roice’s posting, asking, “Are you the same woman I sent the $ for your sister’s husband who was killed during the Afghanistan exit?”

Upon confirmation that she was the sister of Rylee McCollum, Baldwin sent private messages Roice and accused her of being an insurrectionist.

“When I sent the $ for your late brother, out of real respect for his service to this country, I didn’t know you were a January 6th rioter,” Baldwin wrote in one message.

Roice responded by telling the actor that protesting was legal in the United States and that she had already spoken with the FBI, but he persisted, according to the lawsuit.

“Your activities resulted in the unlawful destruction of government property, the death of a law enforcement officer, an assault on the certification of the presidential election. I reposted your photo. Good luck,” Baldwin wrote back.

Baldwin later claimed on social media that he was trying to point out irony in his reposting of her phot, by juxtaposing her brother’s sacrifice for the country with Roice being an “insurrectionist.”

Baldwin reposted Roice’s photo on his own Instagram account, which has 2.4 million followers, discussing the Capitol attack and mentioning Roice’s involvement in the protest on Jan. 6, 2021.

It was clear at the time of the deaths of the service members that McCollum’s family are Trump supporters. They blamed Biden for Rylee’s death. Apparently, Alec Baldwin’s Trump Derangement Syndrome flared up when he put two and two together when he saw Roice’s photo on Instagram. A sane human being would have simply sent a personal message to her voicing his disappointment that she was at the Trump rally that day, if he felt he had to politicize what was a good deed, his donation. She wasn’t involved in the riot on Capitol Hill, though, a distinction Baldwin seems incapable of making. She hurt no one and was exercising her First Amendment right to assemble at the rally. Instead, Baldwin went full-on crazy and exposed her and his opinion of her to his followers. What did he think would happen? He had to have known, it isn’t like he’s unfamiliar of the working of social media, especially when celebrities get involved. He told her “Good luck” after telling her he reposted her photo.

Roice said it only took 20 minutes for the hate to begin. Baldwin even dragged Rylee’s widow into the mess. She wasn’t in Washington, D.C. that day. His followers sent hateful messages to her and Rylee’s other older sister, Cheyenne, too.

One message said “Get raped and die, you worthless [expletive]. Your brother got what he deserved.” Roice forwarded this message on to Baldwin, sarcastically thanking him for the post.

Baldwin ultimately followed the person who sent the message on Instagram. He also chimed in on the feed, calling Roice an insurrectionist and claiming she participated in the riot.

He also misidentified Jiennah as an insurrectionist in one Instagram comment, although she was not in Washington D.C. on Jan. 6, 2021. People began sending hateful and threatening messages Jiennah and Cheyenne McCollum, Rylee’s eldest sister.

The lawsuit says that Baldwin’s conduct was “negligent and reckless”. He didn’t discourage his followers from attacking the women. The lawsuit claims the women suffer from headaches, nausea, loss of sleep, severe anxiety, mental distress and fear for their lives. They seek damages over defamation, invasion of privacy, negligence and intentional infliction of emotional distress.