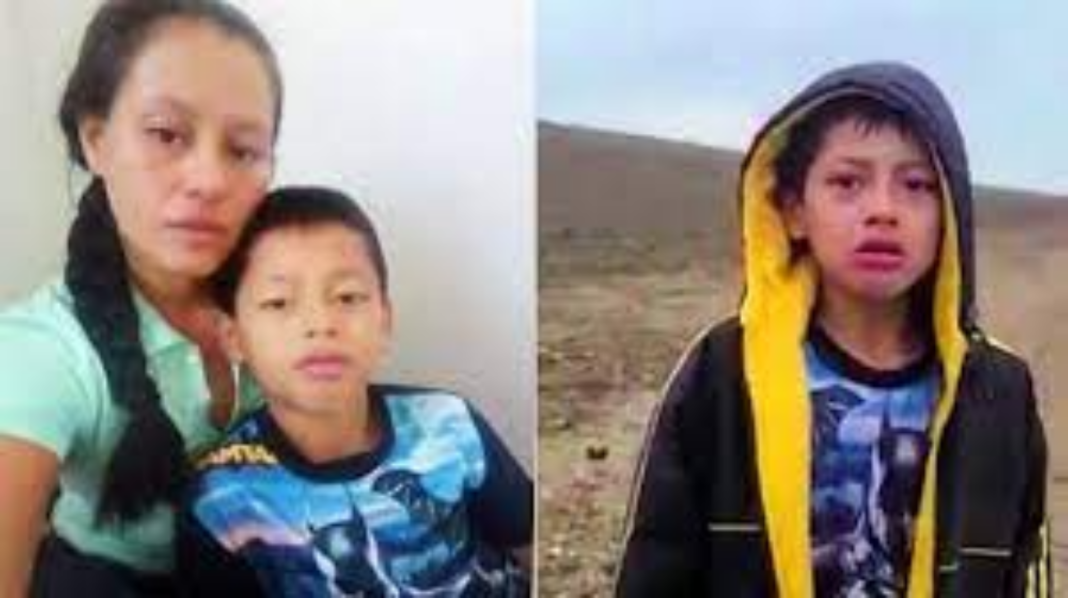 In April, a ten-year-old boy from Nicaragua made international news as he was rescued by U.S. Border Patrol agents. He was all alone, crying, and begging for help. The video of his rescue went viral as it was impossible to watch him in such distress without feeling empathy for the little boy. He has now been reunited with his mother in Texas. It sounds like a happy ending kind of story but it has some really dark undertones to it.

Wilton Obregon was abandoned by smugglers as he crossed the southern border. A Border Patrol agent’s bodycam filmed his encounter with Wilton.

Wilton was discovered wandering on his own on April 1 in the dusty barren landscape near La Grulla, Texas, by a Border Patrol agent on his way home from a shift.

Crying and shaking as he approached the officer’s vehicle, he begged in Spanish: ‘Can you help me? I was coming with group and they abandoned me. I don’t know where they are.’

When asked if he had been told to ask for help, Wilton replied between sobs: ‘No, I came because if not, where am I supposed to go?

‘Somebody could abduct me, kidnap me. I am scared,’ he added.

The boy was rightfully afraid of being abducted. Wilton and his mother were kidnapped by a cartel after they tried to cross the southern border in March. With Title 42 in effect, the two were returned back over the Texas-Mexico border. This is where the story takes a turn. His mother’s brother, Wilton’s uncle, who has lived in Miami for five years, says he could only pay the ransom for one of them ($5,000) so young Wilton was taken across the border for a second time. The human smugglers left him alone there. Wilton was taken to a shelter run by the US Office of Refugee Resettlement, a division of Health and Human Services.

About two weeks later, Wilton’s mother, Meylin, was released by the cartel and she again crossed the border. She turned herself into Border Patrol agents and requested asylum. She was transferred to a migrant center in Texas. She was able to visit Wilton at a center sheltering unaccompanied minors after Wilton had been there for two months.

EXCLUSIVE: Nicaraguan boy, 10, seen sobbing in video after being abandoned by smugglers is reunited with his mother https://t.co/CeeUUkOzUf

The reaction from people may have backfired on the warm and fuzzy narrative of a mother and child reunion. (Cue Paul Simon.) People questioned Meylin’s ability to care for her young son. She endangered his life while doing the same of her own and it led to some dire consequences for the boy. At one point the Nicaraguan government sought custody of the boy. They urged the U.S. government to return Wilton to his family home in an isolated mountain region of the country. His father, Lazaro Gutierrez lives there with other family members. The Nicaraguan government dropped its request for Wilton’s return when his father decided that the boy would be better off in the U.S. with his mother. His father is described as a cattle farmer.

There are some red flags that we can see from Meylin’s brother, Wilton’s uncle, Misael Obregon. He is a construction worker in Miami who planned to take Meylin and Wilton in after their release as they wait for their asylum process to work through the system. Did Misael suddenly find the extra ransom money to secure the release of his sister? What is his role in the whole cartel scenario? He has twin 15-year-old sons who recently crossed the border and are waiting on their asylum claims to be processed. This looks like a family pattern, certainly not behavior that should be encouraged by the United States government.

Misael has an interesting take on American citizens who think that Meylin and Wilton should return to their home country – that opinion shows “bad intentions”. He said, ‘For the people with bad intentions, that they were praying for my sister to return to Nicaragua with her boy… they are American citizens and I hope they never have to go through what we had to.’ I wonder if he wears a Biden, Let us in t-shirt. It is not “bad intentions” for Americans to expect border security and for those seeking asylum in America to do it through the legal process. Most asylum claims don’t qualify for approval. Perhaps Meylin knows that her key to success is through having a child with her.

Meylin is reluctant to go to her brother’s home in Miami now because of the bad publicity she has received.

Up until Sunday, the plan was for the pair to join Meylin’s brother Misael Obregon in Miami.

Misael told Spanish television station Telemundo at the time: ‘Of course they are coming to stay with me.’

But those plans are now up in the air due to online haters that have made things difficult for the family, he told Dailymail.com in an exclusive interview.

Misael, who has been in Miami for five years, revealed: ‘Things have changed. My sister has the idea that she wants to live somewhere else, in the shade, where she will not attract attention.’

‘A lot of people have criticized her, particularly on social media. She doesn’t want to be in the firing line of people attacking her.

‘I had planned to help Wilton start school, but we will have to see. Whatever, Wilton is so happy to be free now.’

So, for now, mother and son remain in the Brownsville area. She is deciding where the two will wait out their asylum process. That’s right – apparently, they get to make that decision. Only in America.