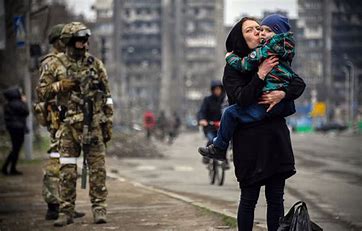 I can’t believe I have to ask this but here it is: Are we trying to get Putin to attack NATO?

Is there some strategic benefit I’m missing to turning this into a hot war between the U.S. and Russia? Like, “the war will end much faster and with fewer casualties if we let the U.S. Air Force bomb Russian troops in the Donbas for a week”?

Between this and the leak last night about U.S. intelligence targeting Russian generals, we’re like a day away from Biden calling Putin a pussy and daring him to try something.

The one concession made to de-escalation in this completely gratuitous admission to NBC is that, allegedly, the Americans didn’t know Ukraine was preparing to attack the ship.

The attack happened after Ukrainian forces asked the Americans about a ship sailing in the Black Sea south of Odesa, U.S. officials told NBC News. The U.S. identified it as the Moskva, officials said, and helped confirm its location, after which the Ukrainians targeted the ship.

The U.S. did not know in advance that Ukraine was going to target the Moskva, officials said, and was not involved in the decision to strike. Maritime intelligence is shared with Ukraine to help it defend against attack from Russian ships, officials added.

If you and I don’t believe that U.S. intel had no idea Ukraine might target the Moskva, how likely is it that the Kremlin believes it?

Lately I’ve been trying to soothe my nerves about the provocations we’re engaged in by telling myself that maybe there’s something important the intel community knows about Russian capabilities that’s left them confident there’ll be no reprisal for leaving our fingerprints all over their failures. What if their nukes don’t work anymore? Or what if we’ve figured out a way to disable them remotely? There’s nothing they can do to hurt us!

But of course there are things they can do to hurt us short of WMD. They seem pretty good at cyberespionage. Presumably they could shut down an American power grid somewhere without leaving much evidence of their presence. Anatol Lieven imagines other options — “the targeting with missiles and drones of U.S. offices and personnel in Kiev; the assassination of U.S. diplomats, military personnel, and intelligence officers in other countries; and warning shots aimed at NATO supply lines in Poland.”

The Pentagon is doing what it can to clean up after the leakers:

Pentagon Press Secretary John Kirby denied the U.S. is assisting Ukraine target Russian generals. “The Ukrainians have, quite frankly, a lot more information than we do,” Kirby said.

Jim Geraghty notes that a member of the National Security Council clarified that battlefield intelligence wasn’t provided to the Ukrainians with the intent to kill Russian generals, which sounds a lot like the spin on providing intelligence about the Moskva. Essentially, the official line from Washington is that we’re telling the Ukrainians where the bad guys are while remaining blissfully ignorant as to how they might react. “What exactly did the National Security Council think that the Ukrainians were going to do with that information? Send those Russian generals a sternly worded letter? Prank call them?” wonders Geraghty.

Lieven thinks the risk of nuclear war is “now greater than it has ever been, even perhaps during the Cuban Missile Crisis.” It’s time to de-escalate, he writes. ASAP:

To ward off this threat, the Biden administration must move immediately to assure Russia that U.S. strategy is to help defend Ukraine, but not to impose a complete defeat on Russia and use this to weaken or destroy the Russian state.

The first step should be for Washington to declare publicly that it supports a diplomatic solution to the issues of the status of Crimea and the Donbas, and that if Russia will cease its offensive in Ukraine and agree to a ceasefire, the United States will respect that ceasefire. This should not of course imply U.S. recognition of Russian claims to these territories. It would simply involve the Biden administration giving its public support to the previous statement by the Ukrainian government that it is willing in principle to “compartmentalize” the territorial issues and leave them for future negotiation.

Such a move by the Biden administration would be met with the usual parrot-hawk cries of “appeasement.” But these critics need to ask themselves the following: Were Eisenhower, Kennedy, Nixon, Reagan, and other U.S. Cold War presidents “appeasers”?

Two problems with that. One: Our goal *is* to weaken the Russian state. Lloyd Austin admitted it. Two: The U.S. and Russia might be willing to call for a ceasefire in the Donbas but it’s anyone’s guess how Zelensky would react. Ukraine just launched an offensive in the east, remember. They just received some seriously heavy weaponry from the west and seem keen to put it to use now that Russia’s meager advance has appeared to stall out. If we ask Zelensky to stand down at the very moment it seems Ukraine might be poised to put together a meaningful advance of its own, would he agree? We’d be in the awkward position of trying to rescue Putin from a momentous defeat, preserving his position in the east when the Ukrainians finally have a realistic chance of controlling Luhansk and Donetsk for the first time in eight years.

I’ll leave you with this psycho as a mood check of Russian state media.

“The opponents of the letter Z must understand that they will not be spared. Everything is serious here: concentration camps, re-education, sterilization!” – this was declared by Shakhnazarov on the state TV #RussiaWarCrimes pic.twitter.com/s3HKhsiSEj